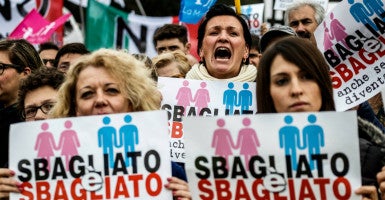 Huge crowds marched in Rome over the weekend to protest national legislation granting legal recognition to same-sex couples in Italy. The measure also would allow either partner in a same-sex couple to adopt the other’s biological children.

Italians rallied at Circus Maximus, the ancient stadium that has a capacity of 350,000, Reuters reported. Organizers estimated that approximately 2 million participated, although officials said that number is too high.

Photo: https://t.co/RUjCr2AZge A moment from #FamilyDay demonstrations in Italy on Saturday pic.twitter.com/1MvIYguj2s

The legislation’s provisions would allow civil unions between same-sex couples and grant pension inheritance rights to the surviving partner in such a union, The Guardian reported.

The bill also would “allow a child legally to have same-sex parents in the case of a gay person adopting their partner’s biological child,” the British newspaper reported.

Opponents of the bill reportedly are especially upset by that provision.

Some Italian municipalities allow civil unions, but no such legal recognition exists nationally.

Prime Minister Matteo Renzi had promised the bill would be enacted last year, but he has faced opposition in the largely Catholic country. A vote in the Italian Parliament is expected later this month.

BBC reported Jan. 23 that tens of thousands in nearly 100 Italian towns and cities had marched in favor of the legislation.

Pope Francis restated the Catholic Church’s opposition to same-sex marriage or same-sex unions the day before the protest, The Guardian reported.

“The family, founded on indissoluble matrimony that unites and allows procreation, is part of God’s dream and that of his church for the salvation of humanity,” the pontiff said.

The pope leads the Catholic Church from the Vatican, an independent city-state located within the boundaries of Rome.

In response to a complaint filed by three same-sex couples who were denied marriage, the European Court of Human Rights ruled last July that Italy was in violation of Article 8 of the European Convention on Human Rights, which concerns “private and family life.”

A summary of the decision reads:

The court considered that the legal protection currently available to same-sex couples in Italy—as was shown by the applicant’s’ situation—did not only fail to provide for the core needs relevant to a couple in a stable committed relationship, but it was also not sufficiently reliable.

A civil union or registered partnership would be the most appropriate way for same-sex couples like the applicants to have their relationship legally recognized.