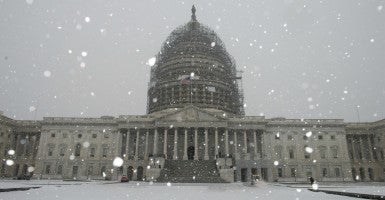 The Article I Project is an initiative to encourage Congress to reassert its constitutional authority. (Photo: KevinDietsch/Newscom)

Standing beneath a painting of the Constitutional Convention in Philadelphia, Sen. Mike Lee and Rep. Jeb Hensarling unveiled their Article I Project to revitalize Congress.

Appealing to the memory of the Founders pictured, the Republican duo said Wednesday their project is meant to encourage the legislative branch to reflex old constitutional muscles and to reassert traditional “congressional primacy.”

And in the Utah Republican’s estimation, the problem isn’t just with President Obama. Instead, Congress has surrendered its own authority to the executive branch and unelected regulators.

Lee and Hensarling want Congress to exercise its authority as outlined in Article I of the Constitution and retake its “first among equals” status among the three branches of government.

Hensarling, R-Texas, chairman of the House Financial Service Committee, blames Congress for allowing regulators to do its job of lawmaking. As a consequence, he said government has become:

a leviathan that has metastasized into the nation’s largest creditor, debtor, and lender; its largest employer, property owner and tenant; its largest insurer, health care provider and pension underwriter.

The two lawmakers’ bicameral Article I Project aims to reverse that growth during a period of “congressional rehabilitation” according to a regimen of their conservative interpretation of constitutional principles.

The organizers of the project promise specific and structural reforms will follow. But in broad strokes, Lee said, it would focus on four areas “at the core of Washington, D.C.’s broken status quo”:

Lee and Hensarling seemed bullish that if Congress fixed itself, it could fix the problems they identify with the federal government. But that requires “hard work and accountability,” Lee said, things that lawmakers find “inconvenient.”

Without any legislative authority, though, the Article I Project serves only as a messaging platform limited to suggesting ideas and developing solutions.

Sen. Jeff Flake, R-Ariz., who also spoke at the event, told The Daily Signal he is “already very encouraged” by recent developments.

Flake said Congress can begin to reassert its authority by changing the way it spends money. Instead of approving all government spending in a lump package with a single vote, he said, he wants the legislature to evaluate individual spending bills.

“The best way will be if our leaders can get the appropriations process back on track,” Flake said. “When we pass appropriations measures one by one, that allows us to go in and actually have some kind of leverage.”

In the House, Speaker Paul Ryan, R-Wis., already has promised to return to regular order on appropriations and pass 12 separate bills. In the Senate, Minority Leader Harry Reid, D-Nev., has agreed not to block that process.

Reasserting congressional authority has come into vogue in the past year.

Though easily the most visible effort, the Article I Project follows an initiative spearheaded by the prominent Federalist Society and a task force led by House Judiciary Chairman Bob Goodlatte, R-Va.

Summarizing the endeavor, Spalding told the audience that the Article I Project had the potential to “reconstitutionalize the federal government by rebuilding Congress.”