Finally, Europe Is Waking Up to Dangers of Multiculturalism 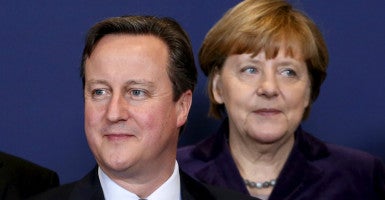 It may be late in the game, but Europeans are finally waking up to how decades of indoctrination into multiculturalism is now imperiling their safety. British Prime Minister David Cameron has led this campaign, but even the leaders of France and Germany are now following.

The fear that national identity is being eroded stands behind much of the angst roiling societies on both sides of the Atlantic, as it has implications for the survivability of representative democracy and even sovereignty. Having European leaders recover confidence in their ideals, tenets, and institutions can only be good for the debate on this side.

>>> The Heritage Foundation will co-host an event on “The War Over American Identity: One Nation No More?” with National Review on Feb. 12. RSVP here.

It is important that France’s François Hollande and Germany’s Angela Merkel are starting to echo Cameron, who has said such things as “We have lacked the confidence to enforce our values. … No more turning a blind eye on the basis of cultural sensitivities.”

When British, French, and German leaders begin to say that immigrants and their children must assimilate and that those who join ISIS may lose their citizenship, it’s time to sit up and take notice.

Of course, these leaders must follow their new rhetoric with actual policies. To do that, they will have to face down opposition from multiculturalist and transnationalist forces they and their predecessors helped create.

Just last week, the British prime minister unveiled a set of policies that seek to convince immigrants to assimilate into British values, or at least integrate culturally. One of these was a 20-million-pound initiative to teach an estimated 230,000 Muslim women living in Britain who speak little or no English to master the language.

In a column in the Times of London, Cameron wrote: “All too often, because of what I would call ‘passive tolerance’, people subscribe to the flawed idea of separate development. It is time to change our approach. We will never truly build One Nation unless we are more assertive about our liberal values, more clear about the expectations we place on those who come to live here and build our country together and more creative and generous in the work we do to break down barriers.”

When British, French, and German leaders begin to say that immigrants and their children must assimilate and that those who join ISIS may lose their citizenship, it’s time to sit up and take notice.

This wrong-headed “passive tolerance” of “appalling practices” foreign to Britain has allowed many Muslim women to fall victim to such customs as forced marriages and female genital mutilation and has allowed extremism to grow, he said.

For this and for his proposal to bring up in October a requirement that women on five-year spousal visas pass a language test after two and a half years in Britain in order to stay, Cameron has come under a great deal of criticism here and in Britain.

The hollering does not seem to have deterred copycats. Over in Germany, Labor Minister Andrea Nahles wrote her own column in the Frankfurter Allgemeine Zeitung that refugees who refuse to integrate or learn German face having benefits cut.

“Whoever comes here to seek refuge and begin a new life must adhere to our rules and values,” Nahles, a Social Democrat, wrote. “We will cut the benefits of those who send the signal that they do not want to integrate. From my point of view, that should also be connected to participation in language courses and, in addition, adhering to the basic rules of our coexistence.”

Meanwhile, Merkel said over the weekend that she expects refugees to return to their home countries once the war in Syria has ended. Merkel’s statements come at a time when she is under increasing domestic pressure for her government’s handling of the crisis.

Across the Rhine in France, Hollande’s plan to remove French nationality from dual-nationality citizens who are convicted of terrorism has led to street demonstrations and one minister to quit the cabinet.

This is a debate that needs to cross the Atlantic. Some possible ideas to increase assimilation, detailed in a Heritage special report published last month, include re-evaluating the practice of officially segregating America into ethnic groups, strengthening the civic and patriotic instruction parts of the naturalization process, and stopping the denigration of America and its history in our schools.