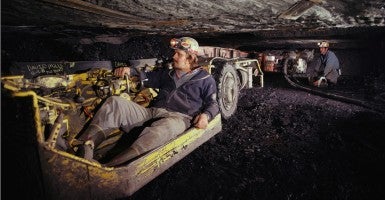 CHARLESTON, W.Va.—The Mountain State has its back against the wall, and time is running out. Leading a coalition of more than two dozen coal states, West Virginia is asking the Supreme Court for an emergency stay of President Obama’s new regulations governing the coal industry.

West Virginia and 26 other states argue that the Environmental Protection Agency overstepped its authority by circumventing Congress to unilaterally implement the package of rules.

The EPA calls it the Clean Power Plan. The states call the move an unconstitutional “power grab” and complain that it will bankrupt their local coal industries.

But while they’re confident the law is on their side, West Virginia Attorney General Patrick Morrisey says time is not. That’s why the states have asked the Supreme Court for an emergency stay to temporarily freeze the Clean Power Plan as the case moves through the legal system.

At issue is whether the EPA will be allowed to become “a central energy planning authority,” Morrisey said.

The District of Columbia Circuit Court of Appeals last week agreed to hear the case on an expedited basis but declined to halt the EPA from implementing the new rules. And while oral arguments are set to begin in June, the battle likely will drag on into next year.

That’s the perfect scenario for the EPA to run out the clock, Morrisey says.

“The EPA’s goal is to obtain compliance,” he tells The Daily Signal, “whether or not the regulation is upheld in court.”

In an unusual legal play at this stage of the litigation process, the states asked Supreme Court Chief Justice John Roberts to grant the freeze in the rules. The court has invited the Obama administration to file a rebuttal by Feb. 4 and likely will hand down a decision the following week.

Morrissey says he is cautiously optimistic that the high court will grant a stay.

“The EPA has consistently run roughshod over the rule of law and West Virginia,” Morrisey says.

And he says he is confident a temporary freeze is justified since the Clean Power Plan “is causing irreversible harm.”

States are scrambling to comply with the plan, which is considered a key component of Obama’s broader effort to achieve climate change goals negotiated in Paris last year.

The president calls the Clean Power Plan “a tremendously important step in the fight against global climate change.” Vetoing a bill from Congress that would have derailed the plan last month, Obama wrote that the measure “gives states the time and flexibility they need to develop tailored, cost-effective plans to reduce their emissions.”

The regulations require states to cut carbon emissions by 32 percent before 2030  and give them until Sept. 6 to submit implementation plans to do it.

Opponents in West Virginia fear that costly regulation will price coal out of the energy market. They point to a recent study by the West Virginia College’s Bureau of Business and Economics that forecasts an 18-percent reduction in the state’s coal production by 2035.

Brian Lego, an assistant research professor at the college, tells The Daily Signal that the production decrease could be as much as 25 percent in the long run. And as businesses brace for the new regulation, Lego predicts that West Virginia will witness more layoffs of coal miners and more shutdowns of mines.

So far this year, the state has seen an avalanche of layoffs. The West Virginia Coal Association estimates that as many as 2,000 miners were put out of work in January.

The CEO of one of the nation’s largest coal producers, Murray Energy, tells The Daily Signal that’s part of a growing trend.

Murray, whose company is one of the litigants requesting that the Supreme Court put a hold on the Clean Power Plan, says that under the new regulations, “people on fixed income aren’t going to be able to pay their electric bills.”

And domestic manufacturers, he says, “won’t be able to compete in the global market because electric rates are soaring.”

In addition to this “economic and personal carnage,” Morrisey told the West Virginia Coal Symposium last week that the Clean Power Plan does “violence to the rule of law.” He also argues that “these rules will transform the EPA from environmental regulators into a central energy planning authority.”

West Virginia’s first Republican attorney general in 73 years, Morrisey has brought the state to the forefront of several legal cases against the Obama administration. But he tells The Daily Signal the current challenge could prove the most significant.

The EPA is trying to “pick winners and losers within the energy marketplace,” he says, warning that if this “unprecedented” action isn’t curbed, the agency’s authority “moves to levels we can’t possibly comprehend.”