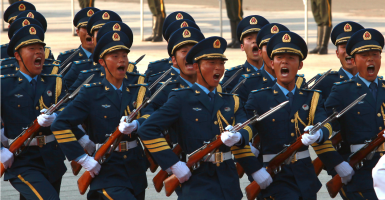 In a move that will make the People’s Liberation Army (PLA) a more competitive and capable force for any future conflict contingency, Chinese leader Xi Jinping today announced the reorganization of the major Chinese military commands. From seven “military regions (junqu),” the PLA will now move to five “major war zones (da zhanqu),” or five theaters. There will now be Northern, Eastern, Southern, Western, and Middle or Central theaters.

Marking a major improvement in capability, these theater or war zone commands will be joint commands, oriented toward fighting and winning “local wars under informationized conditions.” Reflecting the broader reorganization of the PLA, this shift will see a further reduction in the power of the ground forces and a growing emphasis on air, naval, and space/cyber forces.

As such, they are likely to represent a significant improvement in combat effectiveness, especially as they make jointness a permanent feature in PLA organization and training, rather than the more ad hoc approach previously adopted. For nations along China’s periphery, it means that the PLA is likely to be a more flexible, capable adversary once these reforms are fully implemented.

This shift constitutes part of the most fundamental overhaul of the PLA since at least the 1980s, including a reorganization of the various lanes of responsibility within the PLA. This is reflected in the principle “[t]he Military Commission manages the overall; the war zones are responsible for warfighting; the services are responsible for [military force] building (junwei guanzong, zhanqu zhuzhan, junzhong zhujian).”

The Central Military Commission is now responsible for overall management of the PLA, hence the fifteen departments, commissions, and offices. Actual conduct of military operations, however, will be the responsibility of these five new theaters. The services, meanwhile, will be responsible for “army-building”; this will, in some ways, parallel the American concept whereby the Combatant Commands (e.g., CENTCOM, PACOM) are responsible for wartime operations, while the services train and equip the forces.

These major reforms reflect movement in each area. The overhaul of the senior administration of the PLA from four “general departments” to fifteen departments, commissions, and offices is supposed to allow greater bureaucratic efficiency (and likely is also a move to reduce corruption, a major target of Xi’s ire for the past several years).

The new theater commands will facilitate more joint operations, a longstanding Chinese effort that has been underway since the late 1990s. Moreover, unlike the initial push for jointness, there is now a recognition that joint headquarters cannot be ad hoc, but must be established on a permanent basis. The joint campaign command headquarters, previously to be established only in wartime, will now be the basis for these new theater commands.

These new commands are likely to accord much greater roles to the non-ground force services. In particular, the establishment of the Strategic Support Force, one of the three new services announced on Dec. 31, is likely to have a major impact on the organization of these new theater commands. The Strategic Support Force is essentially responsible for establishing information dominance, as it controls space and cyber combat forces.

Given the Chinese emphasis on being able to fight and win “local wars under informationized conditions,” this service is likely to be of paramount importance in each theater’s war planning.

What remains to be seen is their areas of responsibility. To what extent, for example, will they be planning increasingly expeditionary operations? How far from China’s shores will these theater commands extend?