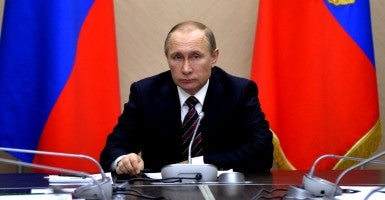 For anyone who ever harbored doubts about the brutal nature of the Russian regime, an afternoon reading the newly published British report of the death of defected Russian spy Alexander Litvinenko should be a frightful reminder of the ruthlessness behind the Putin regime.

Litvinenko defected to Britain in 2000, after becoming a whistleblower and bold critic of the Russian system and security services. He took a principled and highly dangerous stand against the war in Chechnya and was a close friend of Russian businessman Boris Berezovsky, whom he had once been ordered to kill and refused. (Berezovsky was subsequently murdered in 2013.)

From London, Litvinenko continued his activities, becoming close to, among others, famed Russian dissident Vladimir Bukovsky. He was the author of several exposés of Russia’s criminally corrupt system.

On Nov. 1, 2006, Litvinenko was poisoned with a lethal dose of radioactive Polonium-210, in a cup of afternoon tea at a hotel in London, by Russian FSB (Federal Security Service) agents. He died 23 days later.

“The Litvinenko Inquiry: Report into the Death of Alexander Litvinenko” was presented to the House of Commons by the inquiry’s chairman, Sir Robert Owen, the former assistant coroner in the case. The British government did not exactly leap to set up the investigation. It took a lawsuit by Litvinenko’s widow Marina to set the inquiry in motion. The result is a 365-page, disturbing, bizarre, and compelling narrative.

What has grabbed the headlines is Owen’s conclusion that the man behind Litvinenko’s murder was none other than Russian President Vladimir Putin—who had been Litvinenko’s superior in the KGB.

“I have no doubt whatsoever that this was done by the Russian secret services,” Litvinenko told an interviewer on his deathbed in a London hospital. “Having knowledge of the system, I know that the order about such a killing of a citizen of another country on its territory, especially if it [is] something to do with Great Britain, could have been given only by one person.”

“That person is the president of the Russian Federation, Vladimir Putin.”

Owen endorses the conclusion that the murder could have taken place only with the knowledge and approval of Putin, involving as it did an assassination in a foreign capital, with the use of a rare radioactive poison normally outside the reach even of the FSB.

The unscrupulousness of the Russian regime is not a surprise, but it is still shocking. What is also shocking is that U.S. officials are quoted in the British report as convinced that Putin knew about the murder.

Yet the Obama administration remains on a course of accommodation with Russia when a much more assertive policy is clearly needed.