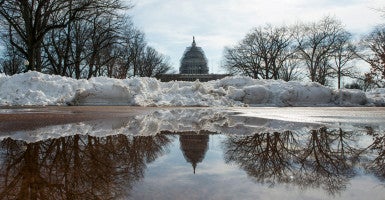 The U.S. Capitol building reflects in a pool of water from the melting snow a recent snowstorm dumped nearly two feet of snow in Washington. (Photo: Bill Clark/CQ Roll Call/Newscom)

After Republicans won a majority in the Senate and maintained their majority in the House in November 2014, I proposed that the two chambers take five modest steps to repair what had become a dysfunctional legislative branch.

This was part of my effort as the recently elected chairman of the Senate Steering Committee to put forward a vision and a plan that would guide the Republican majority toward unity and restore the public’s confidence in Congress.

To recap, the five steps that I proposed to fix Congress were:

A little over a year in, I can confidently say that there has been some substantial progress on almost all of these fronts. But I can also say with equal confidence that there is still much work to do.

By January 22, 2015, the Senate had already taken more votes on amendments than it did in all of 2014. In May, we passed a budget that balanced in 10 years, didn’t raise taxes, and repealed Obamacare. In June, the charter for the Export-Import Bank, the epitome of crony capitalism, expired. And in October, after months of bipartisan work, the Senate Judiciary Committee took the lead on criminal justice reform by passing the Sentencing Reform and Corrections Act.

These were all important, positive steps toward a more transparent, accountable, and responsible Congress. But this is only half the story of 2015: We also took significant steps in the wrong direction, back toward Congress’ dysfunctional past.

Less than a month after we passed a budget that balanced in 10 years, the Senate voted to blow a $200 billion hole in it by passing an unfunded bill—the so-called “doc fix”—that raised Medicare reimbursement rates without any meaningful reform to the program.

There’s also the matter of returning to the discredited, undemocratic legislative process that predominated under Democratic control of the Senate for so many years.

While the Senate has taken far more votes on substantive amendments than we did in the past, procedural tools were still used to block amendments on major pieces of legislation, like the highway bill. Even worse, that same highway bill, which raised spending and made no meaningful reforms to the perpetually insolvent Highway Trust Fund, was then used as the vehicle to revive and reauthorize the corrupt, economically indefensible Export-Import Bank.

Finally, the Senate capped off the year with a $1.8 trillion, more than 1,000-page spending bill that was negotiated in secret and then presented as a take-it-or-leave-it measure with Congress up against a manufactured crisis.

So a few steps forward and a few steps back; some successes to build on and some failures to learn from in 2016.

The good news is that we already have everything we need to fix Congress, reclaim our surrendered constitutional powers, and craft policies that serve the interests of the American people. We still have a five-step plan to fix Congress, and we still have the tools to put it into practice—they’re right there in Article I of the Constitution, ready to be reasserted.

The only question is, can Congress muster the will to step up and finally do its job?