This College President Rejected The Loony Demands of His Students 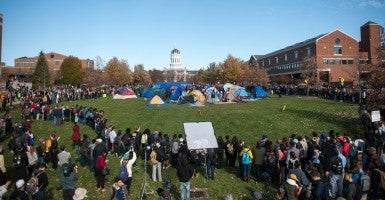 In the wake of incidents smacking of mob rule at the University of Missouri and Yale, some college administrators are waking up.

Students attend college to be educated, not to play “social justice warrior.” So when students disrupt the educational mission of colleges, they should be appropriately disciplined. Whether it was at the University of Missouri or at Yale or elsewhere, in 2015, we saw university administrators respond to student-led disruption in a tepid fashion.

Minding the Campus, a publication that follows higher education, handed out “Worst College President of 2015” awards, and the common thread was that administrators at the “honored” institutions all submitted to prevailing politically correct orthodoxy rather than standing up for the educational mission of their institutions.

But this month, we have a light in the darkness. Marvin Krislov, president of Oberlin College (not exactly a conservative bastion), has rejected the 50-point, 14-page list of demands presented by a handful of student activists. The list of demands was presented in mid-December, and it was a doozy, mixing left-wing insults (“labor exploitation”; Oberlin was “built” upon the “soil” of a “white supremacist, patriarchal, capitalist system”) with unacceptable and even contradictory demands (demanding various hirings, firings, racial quotas, and other spoils).

Now, it took over a month for the Oberlin president to respond. Such a delay could evince some trepidation, but it could also be pragmatic—attempting to demonstrate that concerns were taken seriously before being rejected. (Or, of course, it could be an ordinary response timeline, given the winter break.)

And yet, Krislov’s response is worth a read.

It’s true that it bends over backwards to explain how “[s]ome of the challenges outlines in the [list of demands] resonate with me and many members of our community.” This is, perhaps, too gentle by half.

But it also excoriates the list for including “deeply troubling” demands and “personal attacks on a number of faculty and staff members.” And the response also sets the president apart as a voice of authority when it notes that “our” calling is to provide “our” students with a “broad-based, in-depth education.” Indeed, this use of language appropriately sets educator and student on different levels. One teaches, and the other learns. It is the faculty that is responsible for “scholarship, research, musicianship, artistry, advising, and mentoring[.]”

Viewed through this lens, the list of demands is doubly concerning. As Krislov explicitly states, the demands represent an unacceptable departure from Oberlin’s academic model (the standard model of most American colleges).

Left implied is the concern that the demands represent a troubling presumptuousness by the consumer of education, whose avenues for disagreement with university administration are generally internal, not external. Students may vote with their pocketbook, may choose to donate or not, and may seek to become a member of the academy.

Acceptance into an undergraduate class confers no rights of radical critique: Colleges are supposed to be places of learning, insulated from this sort of “class consciousness.”

Unfortunately, many college administrators across the country have lost sight of education as a mission and have instead focused on collective “dialogue” and hyphenated learning. While Oberlin College’s stiff arm to an unreasonable list of demands is welcome, it does not represent a new direction, nor does it necessarily represent a movement. But perhaps it provides hope to other educators that their day will come.