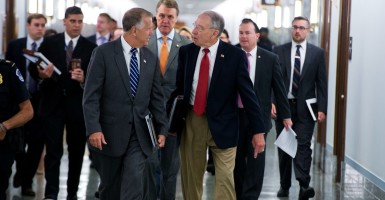 The Senate Judiciary Committee is holding up two of President Barack Obama’s judicial nominees for federal judgeships in Pennsylvania.

Robert Colville and John Younge, both nominated for lifetime judicial positions, did not receive a vote at Thursday’s committee meeting. Judiciary Chairman Chuck Grassley, R-Iowa, said the move was meant to give senators more time to review “their records and answers to written questions.”

Colville and Younge were nominated by Obama in July to serve as U.S. district judges in Pennsylvania. Their delay comes as conservatives have called for the Republican-controlled Senate to stop confirming Obama’s judicial nominees.

After failing to impress the committee during the confirmation process, the duo isn’t likely to make it out of committee anytime soon.

In particular, some Republican committee members weren’t satisfied with either Colville’s or Younge’s answers about the ability of states to regulate access to abortion.

Neither nominee initially addressed questions of abortion directly, saying instead that the controversial Roe v. Wade decision is “settled law.”

Colville, a judge on the Court of Common Pleas for Allegheny County, indicated to the Judiciary Committee that he supported the precedent established in Roe v. Wade. Then, asked if unborn children have human rights, the judge responded, “Probably yes, but only in certain respects and manners of speaking, not all.”

Younge received questions about endorsements he received while running for the Court of Common Pleas in Philadelphia. While a candidate, he sought support from Planned Parenthood’s political action committee.

Younge wouldn’t say if he would have sought that endorsement had he known of allegations that the abortion provider harvested and sold aborted babies’ tissue. (Planned Parenthood has denied that the organization is guilty of illegal activity.) Instead, he noted that there are “disagreements as to the facts and implications of the current controversy.”

Unimpressed, both Grassley and Sen. Thom Tillis, R-N.C., sent follow-up questions. Never a good sign for nominees, according to Senate sources, the additional evaluation could indicate chronic problems with Colville’s and Younge’s nominations.

Confirmation of the judges has been a bipartisan priority for Pennsylvania Sens. Bob Casey, a Democrat, and Pat Toomey, a Republican. Last year, both senators signed their “blue-slip” forms, completing a process to officially recommend nominations from a senator’s home state to the Judiciary Committee.

In December, a Toomey spokesman told a Pennsylvania newspaper that the senator “has spoken directly with Majority Leader Mitch McConnell to emphasize the importance of getting these judges confirmed as soon as possible.”

But in a prepared statement Thursday, Grassley indicated that Casey and Toomey didn’t balk at the delay. Instead, they asked that two other Pennsylvania nominees, also awaiting confirmation, advance for a vote.

The episode comes as debate continues over whether Republicans should continue to confirm Obama’s judicial nominees during the last year of his presidency.

Proponents of the strategy, including Heritage Action for America, argue that the process should come to a halt in protest of what they consider Obama’s executive overreach in other matters. Opponents counter that the process has already become too political.

In January, the Senate confirmed three of Obama’s judicial nominees: Luis Felipe Restrepo to the U.S. 3rd Circuit Court of Appeals on Jan. 11, Wilhelmina Wright as a federal district judge in Minnesota on Jan. 19, and John Michael Vazquez as a U.S. district judge in New Jersey on Jan. 27.

Last week, Sen. David Perdue, R-Ga., blocked the nomination of judicial nominee Dax Lopez to U.S. District Court in Georgia after learning of his work with a group that supports amnesty for illegal immigrants.

Perdue did this by withholding his “blue-slip” recommendation form. As per Senate rules, a member can effectively veto home-state nominees by refusing to recommend them to the Judiciary Committee.