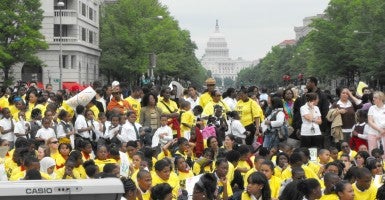 Who knew that in 2016 we would still be fighting for school choice and for quality education for all children? (Photo: Daily Signal)

It’s National School Choice Week, and I am so excited to see the incredible number of events around the country highlighting education. It brings back so many memories of how we got here.

My fight for school choice began in the 1990s, when I was working for my child William to get a quality education in Washington, D.C.

William was eventually able to receive a scholarship to attend a private school in D.C., and it truly changed our lives. I became an advocate for vouchers for low-income kids to get out of schools that were not serving them and into schools their parents chose that would ultimately serve them well.

I worked for years with members of Congress in these efforts, and in 2004, we were successful in getting the D.C. Opportunity Scholarship Program passed and implemented, which has benefited so many children over the years. I was privileged to work with parents and supporters who were adamant about fighting for this program and for school choice programs around the country. It has been an amazing time for children and families who had longed for better educational opportunities for many years.

I witnessed children like Carlos and Calvin Battle; Tiffany Dunston; Jordan White; Shawnee Jackson; and many, many more who were able to finally obtain the education they deserved thanks to school choice. I’ve followed their progress over the years and have been pleased to see these young people triumph—along with many others who benefited from the D.C. Opportunity Scholarship Program to attend schools that provided them the tools for a happy and successful future.

Who knew that in 2016 we would still be fighting for school choice and for quality education for all children?

I’ve watched the progress of school choice programs around the country, and I’ve seen these programs work for the children who participated in them. It’s been a fulfilling period for those of us who are committed to ensuring that all of America’s children receive the best education possible.

As we celebrate another National School Choice Week, I am thrilled to see folks really stepping up and speaking out. Who knew that in 2016 we would still be fighting for school choice and for quality education for all children?

But I am more hopeful than ever before.

I got into this movement as one mother fighting for one child, and I’ve seen it grow to where hundreds of thousands of parents, supporters, and legislators who have stood up and demanded that educational options be provided that would give children a better chance for a future that is brighter than the sun.

I stand along with so many of the warriors who have been on the front lines of this fight, and we will continue to speak out until every child is enrolled in a quality educational environment!