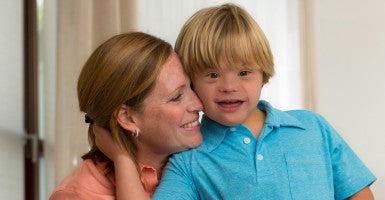 “This really is a matter of preventing discrimination based on having another chromosome," David Prentice of the Charlotte Lozier Institute said. (Photo: Ariel Skelley Blend Images/Newscom)

A Missouri state senator proposes to ban abortion based on prenatal screenings for Down syndrome.

State Sen. David Sater, R-Cassville, told The Daily Signal he is sponsoring S.B. 802 in the Missouri Senate at a time when other state legislatures have taken similar action to protect unborn children with Down syndrome.

“I think it is discrimination to abort a baby just because of a genetic abnormality, just because they are a little bit different,” Sater, a trained pharmacist who previously served as president of the American Cancer Society, said.

Sater is chairman of the Missouri Senate’s Seniors, Families, and Children Committee, which conducted a hearing Tuesday where Ryan Gallagher, father of a 2-year-old girl with Down syndrome, testified in support of the bill.

This act prohibits any person from performing or inducing an abortion on a woman if the person knows that the woman is seeking the abortion solely because of a prenatal diagnosis, test, or screening indicating Down syndrome or the potential of Down syndrome in an unborn child.

Additionally, under current law all attending physicians must complete an abortion report for each abortion performed … Any physician or other person who violates the provisions of this act shall be guilty of a Class A misdemeanor and subject to civil liability and revocation of his or her professional license.

“Abortion is a deeply personal and sometimes complex decision that must be left to women, in consultation with their families, faith, and health care providers,” Mary M. Kogut, president and CEO of Planned Parenthood of the St. Louis Region and Southwest Missouri, said in a statement provided to The Daily Signal.

Senator Sater’s inflammatory bill does nothing to support people with disabilities and their families and only underscores the legislature’s determination to eliminate Missourians’ access to safe and legal abortion.

>>> Video: A Mom’s Story of Raising a Daughter With Down Syndrome

In 2013, North Dakota prohibited doctors from performing abortions because of fetal genetic abnormalities. Indiana and Ohio are pursuing similar actions.

The Missouri proposal, the biochemist told The Daily Signal, is “an anti-discrimination bill to prevent the destruction of these lives needlessly.”

“This really is a matter of preventing discrimination based on having another chromosome,” he added.

Many initial prenatal screenings for mental disabilities are not definitive diagnoses, Prentice said, arguing that “people need to understand the real facts and not react out of fear.”

“Even if it was certain in terms of diagnosis, it is extremely important that parents know the facts about how a person with Down syndrome’s life will progress,” Prentice said, adding that life satisfaction for many children and their families is high.

Dr. Donna Harrison, executive director of the American Association of Pro-Life Obstetricians and Gynecologists, told The Daily Signal that “fear and ignorance are the biggest problem that a woman faces when she’s been given that diagnosis [for her child].”

Down syndrome children live happy and productive lives, Dr. Harrison said, adding that adoption is a viable option since many parents would “provide the love and nurturing that that child needs.”

“What that woman really needs is hope,” she said.

Dr. Harrison encouraged parents who receive a diagnosis of Down syndrome for their unborn child to get in touch with a support group in their area.

“There are wonderful, helpful people who’ve walked that path already who can encourage them,” she said.