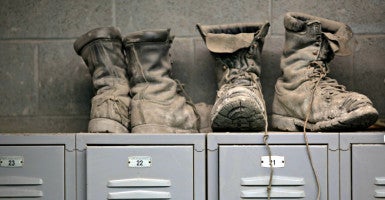 Coal mining boots rest atop miners' lockers before the afternoon shift at a coal mine near Gilbert, W.Va., in May 2014. (Photo: Robert Galbraith/Reuters/Newscom)

CHARLESTON, W.Va.—There’s little separation between church and the fossil fuel industry in West Virginia’s coal country. Still reeling from recent mine shutdowns, the state legislature has set aside Jan. 31 as a “day of prayer for coal miners.”

“We need a higher power to change the hearts and minds of those who want to destroy Appalachia.”—Roger Horton, Citizens for Coal

On Sunday, a congregation of pastors, businessmen, and lawmakers will seek divine intervention in one of the nation’s hardest-hit coal economies. Doubtless, though, many will ask for deliverance from what they consider a man-made crisis.

“West Virginia’s absolutely in dire straits,” Roger Horton, president of Citizens for Coal, the organization that spearheaded the prayer effort, said in an interview Wednesday with The Daily Signal. “The point we’re trying to stress is that we need a higher power to change the hearts and minds of those who want to destroy Appalachia.”

The legislators and businessmen who gathered at the 43rd annual West Virginia Coal Symposium here seem to agree and likely will pray that God change Washington.

“The vast majority of the problem comes from President Obama and his EPA’s war on coal,” state Senate President Bill Cole, a Republican, told The Daily Signal.

Cole, who also serves as lieutenant governor and is running for governor, argues that the increased cost of new regulations has priced coal out of the market, persuading consumers to use other energy sources and pushing miners out of their jobs.

An Avalanche of Layoffs

Whether he’s right or not, there’s plenty to pray about in the Mountain State.

The first three weeks of January witnessed an avalanche of layoffs, leaving almost 2,000 coal miners permanently out of work by some estimates. And just recently, one of the largest producers in the state, the now bankrupt Alpha Natural Resources, announced its own bad news. In July, the company will cut another 900 jobs.

But even as the boom in natural gas continues to put new pressure on coal, many West Virginians blame government regulation, not the market, for the downturn.

Under the Obama administration, the past seven years have brought new regulations on coal mining and, critics say, a host of new costs. Now the industry is bracing for the latest and most sweeping regulation issued unilaterally by the EPA: the Clean Power Plan.

The rule requires states to cut carbon emissions by 32 percent before 2030 and gives them until Sept. 6 to submit their plans to do it.

The Clean Power Plan is a key component of Obama’s effort to execute the global climate agenda struck last month in Paris. Proponents say the international compact will substantially clean up the environment by encouraging renewable fuels. Opponents say it will bankrupt the coal industry by imposing new regulations.

“When coal goes away, it’s devastation and poverty in the worst form,” @BillColeWV says.

On Wednesday, Cole told The Daily Signal that communities in his district are still recovering from existing rules.

“We’ve closed down power plant after power plant and destroyed our own market for coal,” the Senate president and lieutenant governor said. “When you get into those southern coal communities, when coal goes away, it’s devastation and poverty in the worst form.”

Cole points to the “ghost towns” in West Virginia’s McDowell County. Once the leading coal-producing region in the nation, the county ranks as one of the poorest in the country. Without mining, the median household income peaks just above $22,000, according to the U.S. Census Bureau.

But it’s not just individual counties that are hurting. The coal market is tightly intertwined with West Virginia’s financial health. Fossil fuel provides more than half of the government’s business income tax and adds billions to the state’s bottom line.

In recent years, as the coal market shifted, West Virginia lost its footing further. The Associated Press reports that the state expects a budget deficit of $284 million for 2016 and another $466 million in 2017.

West Virginia House Speaker Tim Armstead, a Republican, attributes part of that funding gap to “the devastating ripple effect” of every mine shutdown.

“Every time we see a mine close,” Armstead told The Daily Signal, “our men and women are put out of work. That not only impacts them and their families, but it influences all the businesses in that community.”

“This over-regulation has stifled production [and] put our people out of work,” @ArmsteadWV says.

And although both of the state’s top lawmakers credit their congressional delegation to Washington for bringing attention to the issue, they say the Obama administration has turned a deaf ear.

“It’s very clear that this over-regulation has stifled production [and] has put our people out of work. They recognize that,” Armstead said of the administration.

Rather than attending the Paris climate summit last year, the House speaker said, he wished “Obama would visit West Virginia instead.”

‘Get Out of the Lord’s Way’

“He’s simply done what he’s wanted to do,” Raney said Wednesday, referring to remarks Obama made as a presidential candidate in 2008. “He said he was going to bankrupt the industry when he was running [for president], and that’s what he’s set out to do.”

The administration continues to “circumvent Congress” with executive action and an unaccountable Environmental Protection Agency, the coal association president said.

West Virginia is among 27 states that have mounted a legal challenge to the Clean Power Plan, arguing that without congressional approval, the rule amounts to “a power grab.”

Now before the District of Columbia Circuit Court, that case will be decided this summer but is expected to come before the U.S. Supreme Court sometime in 2017.

Although Raney said “going to court is now our only recourse,” he also sees another last option for coal producers fearful of new regulation: prayer.

“If we have enough sense to get out of the Lord’s way, he often provides a path for us,” Raney said. “Certainly he must be aware of the suffering that’s going on and of how deeply its cutting in the coal fields.”