Senate Confirms Another Obama Judge With Only 2 Republicans Voting No 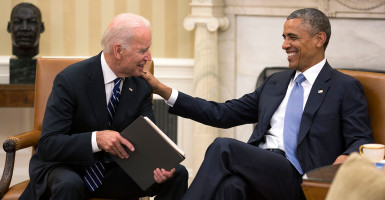 President Barack Obama continued to reshape the federal judiciary Wednesday with the confirmation of another judge to a lifetime appointment. He is the third this month approved by the Republican-controlled U.S. Senate.

John Michael Vazquez won confirmation late Wednesday on a vote of 84-2 to be a U.S. district judge in New Jersey. Vazquez had the backing of New Jersey’s two Democrat senators, Robert Menendez and Cory Booker. Of the six roll-call votes in the Senate so far in 2016, half have been to confirm Obama-appointed judges. The Senate previously confirmed Luis Felipe Restrepo to the U.S. 3rd Circuit Court of Appeals on Jan. 11 and Wilhelmina Wright as a federal district judge in Minnesota on Jan. 19.

Heritage Action for America, a sister organization of The Heritage Foundation, opposed Vazquez’s confirmation and called on the Senate to stop advancing Obama’s nominees.

“Our system of government requires each branch to jealously guard its prerogatives, and President Obama routinely tramples over the legislature’s prerogatives,” William Wolfe, deputy director of government relations for Heritage Action, said in a statement. “Senators should not stand by idly for the next 12 months. They must act to reassert their constitutional prerogatives.”

Vazquez, who currently works at a law firm in New Jersey, was the state’s first assistant attorney general from 2007 to 2008. As the No. 2 official in the attorney general’s office, he served during the administration of New Jersey Gov. Jon Corzine, a Democrat. Prior to that role, he was an assistant U.S. attorney under then-U.S. Attorney Chris Christie, now the state’s Republican governor.

In recent years, Vazquez donated to both of New Jersey’s Democrat senators, giving $2,500 to Menendez during his 2012 re-election and $1,000 to Booker during his 2013 campaign.

Unlike Wright, the previous district court nominee to face a Senate vote, Vazquez encountered little opposition. Wright’s accusation that President Ronald Reagan was a “bigot” and other controversial statements prompted 36 Republicans to oppose her confirmation.

Grassley helped broker the deal for the two Iowans—Leonard Strand and Rebecca Ebinger—in exchange for Senate confirmation votes on Restrepo, Wright, and Vazquez.

At some point this year, Republicans are expected to invoke the so-called “Leahy Rule”—named after Sen. Patrick Leahy, D-Vt.—to halt the judicial confirmation process. The rule generally applies during the last six months of a lame-duck president’s administration, but the time period can vary.