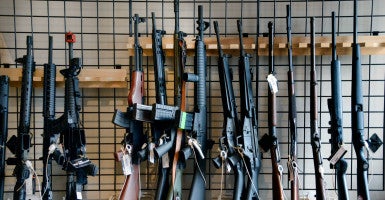 Senate Democrats are reviving  efforts to lift a 20-year-old ban on using taxpayer dollars to research gun-related crime and violence in the United States.

In a press conference last week, Democrats announced a new bid to give money to the Centers for Disease Control and Prevention specifically to pay for such research.

“For gun violence, which kills more than 33,000 Americans a year, the CDC’s budget is zero,” Sen. Ed Markey, D-Mass., said. “That is wrong, that is unacceptable, that is immoral.”

The Huffington Post reported that Markey called for Congress to authorize $10 million annually, for six years, so the CDC could do such research.

Prompted by a spike in mass shootings, Democrats attempted to increase pressure on their Republican colleagues to strip the ban from last year’s final spending package.

Despite the failed push, Markey and other Democrats joined with three academics for the press conference Thursday and vowed to reignite momentum to end the restriction on CDC spending.

The ban on funding began in 1996, when Congress passed an appropriations bill with a provision barring CDC’s use of taxpayer money for research that would “advocate or promote gun control.”

“Research could have been continued on gun violence without infringing on the rights of gun owners, in the same fashion that the highway industry continued its research without eliminating the automobile,” Dickey wrote in a letter last month to the House Gun Violence Prevention Task Force.

Dickey said the measure was intended not to freeze federal funding for such research, but to prevent the government from attempting to “raise emotional sympathy” in an effort to advance gun control.

“It is my position that somehow or some way we should slowly but methodically fund such research until a solution is reached,” he wrote to Rep. Mike Thompson, D-Calif. “Doing nothing is no longer an acceptable solution.”

President Barack Obama issued an executive memorandum in 2013 reversing the ban, urging Congress to allocate $10 million for the CDC to do research on gun-related crime and violence, but lawmakers refused to provide the funding.

Republicans argued in a 2015 committee report that the provision should remain intact and is intended to “protect rights granted by the Second Amendment.”

Markey, along with 17 other Democrats, sent a letter earlier this month to Senate Appropriations Chairman Thad Cochran, R-Miss., pressing him to hold a hearing exploring the usefulness of such government research.

In an interview with CQ, Markey expressed confidence the issue would at least be discussed before the end of this year, but he didn’t go so far as to promise the ban’s reversal.

“We will have the debate this year,” Markey said. “We will have plenty of opportunities before the end of this year to ensure that this discussion is held on the floor of the Senate.”