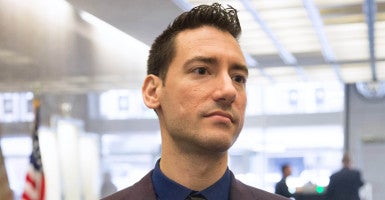 A grand jury in Texas indicted David Daleiden, founder of the Center for Medical Progress, for his role in undercover videos about Planned Parenthood. (Photo: Jeremy Breningstall/ZUMA Press/Newscom)

Copies of the indictments from the Harris County district clerk’s office are embedded at the bottom of this story.

The Center for Medical Progress released a series of undercover videos beginning in July 2015. They showed high-ranking Planned Parenthood officials engaging in discussions about the sale of aborted baby body parts and fetal issue.

“The videos show Planned Parenthood’s senior leadership partaking in a widespread and organized violation of state and federal laws forbidding partial-birth abortions and profiteering from the sale of fetal organs and tissues,” Daleiden wrote an op-ed published Monday by USA Today.

At the request of Texas’ Republican lieutenant governor, Harris County District Attorney Devon Anderson opened an investigation into the Houston-based chapter of Planned Parenthood, which was the subject of one of the undercover videos.

Planned Parenthood consistently has denied any wrongdoing and denounced the videos as the “heavily edited” work of “extremists.”

“These anti-abortion extremists spent three years creating a fake company, creating fake identities, lying, and breaking the law,” Eric Ferrero, vice president of communications for the Planned Parenthood Federation of America, said in a statement. “When they couldn’t find any improper or illegal activity, they made it up.”

In a statement published by The New York Times, Daleiden noted the irony of the grand jury’s decision—indicting him for “buying” fetal tissue but not Planned Parenthood for selling it:

The Center for Medical Progress uses the same undercover techniques that investigative journalists have used for decades in exercising our First Amendment rights to freedom of speech and of the press, and follows all applicable laws. We respect the processes of the Harris County district attorney, and note that buying fetal tissue requires a seller as well. Planned Parenthood still cannot deny the admissions from their leadership about fetal organ sales captured on video for all the world to see.

Following the grand jury’s announcement, Texas Gov. Greg Abbott, a Republican, said the state would continue to pursue its investigation of Planned Parenthood.

The Planned Parethood videos exposed the horrific nature of abortion & the shamefull disregard for human life…https://t.co/G7O9b2oIgp

In October, Texas ended Medicaid funding for Planned Parenthood. The state is also pursuing its own investigation.

Lauren Reeder, a prosecutor for Anderson’s office, serves on Planned Parenthood Gulf Coast’s board of directors, according to her LinkedIn profile. Operation Rescue urged the district attorney to appoint an independent special prosecutor to investigate Planned Parenthood.

In response to the potential conflict of interest, Anderson assured the Houston Chronicle:

[Reeder] will not be involved in any manner in this investigation. If at any time in the future, reliable and credible information is brought to my attention that would question our ability to continue to perform a fair, thorough and independent investigation of this matter due to her board membership, I will revisit the issue of seeking the appointment of an independent prosecutor and act accordingly.

With Monday’s announcement, Planned Parenthood boasts that officials from a dozen states have been unable to find that the organization did anything wrong.

Meanwhile, Planned Parenthood is pursuing a federal lawsuit in California against the Center for Medical Progress, Biomax Procurement Services, Daleiden, and Merritt, among others. Planned Parenthood called the videos released by Daleiden’s organization a “smear campaign.”

The Center for Medical Progress called this a “last ditch move of desperation.” In a statement Jan. 14, it said the California lawsuit is “a frivolous lawsuit in retaliation for CMP’s First Amendment investigative journalism that has done nothing more than tell the truth about Planned Parenthood’s lawless operations.”

This story was updated with additional quotes from Planned Parenthood, David Daleiden, and Texas officials who weighed in on the indictment.