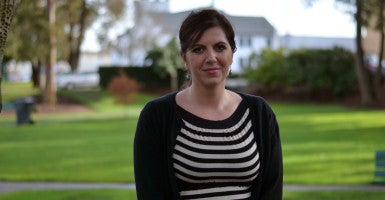 Kaeley Triller Haver makes an emotional plea to lawmakers to undo a policy that allows individuals to access public facilities based on their gender identity. (Photo: Kelsey Harkness/The Daily Signal)

OLYMPIA, Wash.—A group of women who say they are former victims of sexual assault are making an emotional plea to Washington state legislators to reverse a bathroom policy that they say leaves them and their young children vulnerable, exposed and unsafe.

“It started when I was in diapers and went through until I was 10,” Kaeley Triller Haver, who is now 32, told The Daily Signal of her abuse. “I used to get watched in the shower—that was his thing.”

Gretchen Flores, a 47-year-old from Puyallup, Wash., said her abuse happened inside a locker room. “I use to get cramps in my legs when I would swim and he would tell me to come up with him,” Flores said. “He would start at the base of my leg and move up farther than he should have.”

“For me, grooming started at 8 and raping started at 9,” Simon, 39, told The Daily Signal. “It was a good 18 years before I could start speaking out about it.”

The Daily Signal met with Simon, Triller Haver, and Flores in Washington’s state capital to learn why they’re breaking their silence about their past experiences to fight what they believe are dangerous new policies.

“There is no doubt in my mind that many, many people will be hurt with this kind of policy,” Simon said.

The policies, which went into effect Dec. 26, grant individuals full access to bathrooms, locker rooms and other gender-specific facilities in accordance with their chosen gender identity instead of their anatomical sex.

But already,Simon and the other victims feel their stories have fallen on deaf ears, and they’re being portrayed in the public as “fearmongers.”

And now I’m a fearmonger because I’m speaking out about it. I don’t accept it. I’m not. I’m not crying that the sky is falling. This is actually happening. It’s not a pretend thing, I wish it was. Months before the rules were officially adopted as state policy, the YMCA of Pierce and Kitsap Counties began allowing transgender members to use locker rooms on the basis of gender identity.

“In April 2015, the YMCA created a policy to demonstrate our commitment to our transgender community,” the organization said in a statement. “As a community-based non-profit organization, we are committed to reflecting the diverse communities we serve. We also have a foundational commitment to child abuse prevention.”

At the time, Triller Haver was working as the organization’s communications director. When she heard the plans to go this route, Triller Haver said she was asked to “draft some talking points.”

“As a survivor of sexual assault,” Triller Haver said she told her bosses, “I can’t do this.”

“They gave me two choices,” she said. “I could resign and receive severance for 10 weeks if I kept quiet or I could quit.”

“Guess what I picked.”

As more members found out about the policy, a storm of backlash ensued. According to the Seattle Times, 300 households canceled their memberships.

In September, the YMCA decided to scale back its new locker room policies. But by December, they were reinstated.

But critics, including Triller Haver, Simon, and Flores, believe the YMCA was doing much more than following the law—they believe the organization was helping to make it.

“They colluded with the Human Rights Commission,” Triller Haver said, citing documents she saw while working there. “They spearheaded this effort … I don’t think they could have done it if they didn’t have a Christian organization championing it for them.”

The Daily Signal reached out to the YMCA of Pierce and Kitsap Counties for comment. The YMCA did not respond to our request.

Triller Haver and Simon have since canceled their memberships—something that as Christians and longtime volunteers at the organization, they thought they’d never do.

Flores said she intends to do the same, but hasn’t been able to go back. In the meantime, Triller Haver, Simon, and Flores have stayed busy organizing a grassroots campaign that includes picketing on sidewalks to pressure the organization into changing their policies.

Jill Wade, a mother of two from Spanaway, Wash., is one of the women who joined in on the protests. Just when they thought they were beginning to make progress, the Washington Human Rights Commission applied the rules to all schools and businesses with eight or more employees.

“We’ve been raising awareness about the YMCA but now at this point, they’re a small fish,” Wade said.

A ‘Small Fish’ in a Big Sea

The women are now turning to public officials to plead their case.

Already, three Washington lawmakers are working on measures that would scale back the rules to different degrees.

Sen. Doug Ericksen, a Republican from Bellingham, plans to introduce a “simple” one-paragraph proposal that would repeal the rules drawn up by the Human Rights Commission and ban the commission from taking similar action.

“I believe that when I drop my kids off at school, or when I take them to a private gym, I have a right to expect that the men will use the men’s locker room and the women will use the women’s locker room,” Ericksen told The Daily Signal. “I shouldn’t have to worry about my young daughters having to come face to face with things that they should not have to be exposed to at their age.”

A trio of Republicans, Reps. Brad Klippert, Tom Dent and Dan Griffey, introduced a bill that requires that a person’s DNA be used to determine what facilities they are and aren’t allowed to use.

Rep. Graham Hunt, a conservative from Orting, Wash., wants to ban anyone from using public facilities opposite from his or her anatomical sex unless that person has undergone sex-reassignment surgery.

Triller Haver, Simon and Flores don’t have a preference as to what version the state adopts—they’re just desperate to see a change.

Having been watched in the shower by her abuser, Triller Haver said it’s been “a gentle, slow process of healing” to use locker rooms again.

“I was a college athlete all growing up and I couldn’t even in college shower with my team,” she said. “So for me to use a locker room at all, that’s been a gentle, slow process of healing and I feel like that completely got stripped away.”

The YMCA, Triller Haver added, “was the first place I did shower in public.”

In November 2015, Triller Haver authored an emotional blog post in The Federalist about her past abuse and why she believes that allowing transgender women into the women’s locker room poses a serious threat.

I am not saying that transgender people are predators. Not by a long shot. What I am saying is that there are countless deviant men in this world who will pretend to be transgender as a means of gaining access to the people they want to exploit, namely women and children. It already happens. Kaeley Triller Haver, a single mom, said her parents used to work at the YMCA and the organization was like “home” growing up. (Photo: Kelsey Harkness/The Daily Signal)

For Flores, who said she was abused inside a locker room when her mom would drop her off for swimming classes, the policies are particularly traumatizing.

“Ever since the Y did this, I’ve been waking up sometimes with cramps in my legs and that feeling of terror again,” she said. “If you were a woman assaulted by a man, it feels extremely unsafe.”

Simon, who used to volunteer for the at Mel Korum YMCA in Puyallup to make sure all volunteers completed training—which included Child Abuse Prevention Training—said she recently experienced her first panic attack in the last decade.

“I’ve had my first panic attack in 10 years now knowing in my state there are only certain bathrooms that I will be able to enter safely,” she said. “Places where children gather are the number one place where pedophiles try to get into.”

Since deciding to speak out, Triller Haver, Simon, and Flores say they’ve been attacked and labeled as “fearmongers.”

But Simon, who said her abuser went on to attack other girls after her, said she won’t let the insults stop her. “I know the full weight of not speaking out and people getting hurt,”Simon said, adding:

Sex abuse is a silent epidemic and you’re silenced because of the shame, the guilt, there’s a lot of manipulation – that you want it, that it’s your fault. To finally get to the place where I can say I was a little girl that that happened to it there was no shame there was no guilt…That is why so many women stay silent. It’s such a twisting of the soul.

To quell anxieties that she might confront male genitalia in the women’s locker rooms, Triller Haver said she’s been instructed to use “private stalls.”

“If we as survivors have issues, we’re invited to use single occupancy stalls,” she said, adding:

It feels like you’re saying, ‘I have to do what you want with my body or I’m a horrible person,’ and that’s a manipulation. I can be a very loving person but I don’t have to shower with you.

Since sharing her story on The Federalist, Triller Haver said she’s heard from “hundreds” of other sexual assault victims who share her concerns with the new policies.

But beyond that, it’s been difficult finding people willing to listen, she said.

Looking down at her 5-year-old daughter playing on the floor, Triller Haver said, “I shouldn’t have to fight so hard to be heard.”