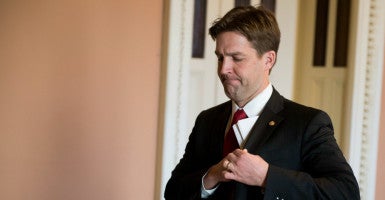 Two Republican senators opened up a broadside assault against the Environmental Protection Agency last week in the ongoing battle over President Barack Obama’s controversial “Waters of the U.S.” rule (WOTUS), a regulation that extends federal authority over smaller waterways.

In a letter to Attorney General Loretta Lynch, Sens. Jim Inhofe of Oklahoma and Ben Sasse of Nebraska pushed the Department of Justice to investigate whether the EPA “knowing and willfully violated” federal law.

The call for oversight comes as Republicans complain of ongoing executive overreach, fearing that without a push, the administration will continue to turn a blind eye on internal misconduct.

The letter follows a December 2015 report from the Government Accountability Office that found that the EPA violated anti-lobbying provisions by spending tax dollars to persuade Congress and the public to support proposed WOTUS regulations.

That conclusion stems from EPA activity during their blitz to crowd source support for the rule. The government agency launched Facebook, Twitter, and YouTube campaigns to counter Republican opposition to WOTUS, the New York Times reports.

In addition, the EPA also employed a social media platform called Thunderclap to solicit comments favorable to the rule.

Later, EPA Administrator Gina McCarthy used this solicited support in an attempt to sway Congress back in March of 2015. Before the Senate Environment and Public Works Committee, she testified:

According to the GAO, the activity violated the Anti-Deficiency Act—which prohibits the use of tax dollars without Congressional authorization—and therefore constituted illegal “covert propaganda.”

The Anti-Deficiency Act stipulates that any violating agency must conduct its own internal investigation to identify those responsible—individuals who could be subject to a $5,000 fine and 2 years in prison.

But the EPA insists their activity was all a regular part “of a far reaching effort to educate the American public.”

The senators charge that the EPA hasn’t been sufficiently responsive and are asking that the Department of Justice open their own investigation “to determine if any crime has occurred.”

Despite the fact that the Government Accountability Office found that they broke federal law by running a covert propaganda campaign to support their sweeping WOTUS rule, the EPA has doubled down on their lawlessness. It’s time for the Department of Justice to investigate.

The letter represents the latest Republican volley in an ongoing battle over the WOTUS rule.

Advocates contend it would ensure clean water for public and environmental health. Opponents criticize the measure for expanding the federal government and threatening private property rights.

Last week, Obama vetoed a proposal passed under the Congressional Review Act that would have scrapped the measure altogether. Republicans also tried, and failed, last December to gut funding for rule during the end of the year spending bill.

The rule still isn’t in effect, however. In October, the Sixth Circuit Court of Appeals temporarily blocked the WOTUS rule.