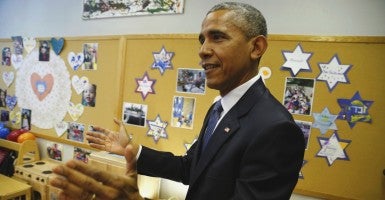 Congress should take this opportunity to get things right, rather than inflicting five more years of problematic policy. (Photo: Jonathan Ernst/Reuters/Newscom)

One of the most controversial points of debate has been the school meal standards that implement the Healthy, Hunger-Free Kids Act of 2010, the law and standards championed by First Lady Michelle Obama. These prescriptive federal standards micromanage what children eat at school, placing restrictions on caloric intake, nutritional content, and portion sizes.

The federal standards have been a disaster: some schools have dropped the school lunch program altogether because of the difficulty and cost associated with implementing the standards. While others have reportedly taken money out of education budgets to cover the costs of the program. Children are throwing away food because it’s unpalatable. And students even started social media campaigns protesting the standards.

It’s hard to have healthy, hunger-free kids when kids are hungry because they don’t like the food. It is also difficult for kids to be healthy when they are hungry.

Instead of tinkering with the problematic standards, as the Senate Agriculture Committee has attempted to do, Congress should begin with a clean slate.

For instance, altering the whole grain requirements and delaying the enforcement of the sodium restrictions (as is being proposed) is simply giving in to the existing bad policy, rather than doing what it takes to fix the underlying problems of inflexible, one-size-fits all standards.

The bottom line really is whether the federal government should be the nutritionist for our country’s children. The current standards assume that only bureaucrats in D.C. have the best interests of children in mind and are capable of making wise nutrition decisions. For proponents of the current meal standards, the federal government must be the nutrition czar and control what children eat. That’s quite an insult to those closest to students: the personnel in their schools and their parents.

Federal standards, and particularly overly prescriptive standards, remove parents and local leaders from the decisions surrounding children’s nutrition. Parents already teach their children how to make dietary decisions that meet their individual child’s needs. Children are unique. For example, some children need more calories than others, based on how physically active they are or their size. Rigid federal standards ignore these facts.

Of course, parents can’t have absolute control over what food their children select when at school (even if they bring their food to school). However, if parents are concerned about the nutritional standards in their child’s school, they are much better off having local officials making nutritional decisions because these officials will be far more likely to listen to parental concerns than faceless bureaucrats in Washington, D.C.

A “federal government-knows-best” mindset also disregards the complexity of dietary decisions. Maximizing nutrition isn’t the only factor that adults or children consider when making food choices.

There can also be unintended consequences from very restrictive standards. If children reject food at school, they very well may offset this by overdoing it with foods outside school. Rather than building on flawed policy and pushing the Obama nutrition agenda, Congress should ensure that the school meal standards respect the role of parents and local government – not to mention students.

Congress should take this opportunity to get things right, rather than inflicting five more years of problematic policy.