Congress Deserves Credit for Trying to Rein in EPA, but More Is Needed 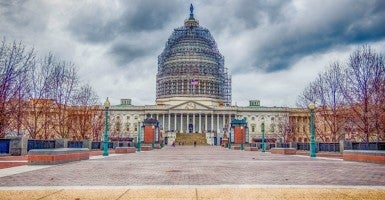 Congress deserves some credit. They passed legislation to try and block some of the Environmental Protection Agency’s overreach, even recognizing that President Barack Obama would veto its bills.

Under the Congressional Review Act, Congress can use an expedited process to rescind agency rules and block an agency from issuing any rule that is substantially the same as the rejected rule.

The Clean Power Plan requires states to meet carbon dioxide emissions reduction goals for existing power plants. The greenhouse gas New Source Performance Standards rule caps emissions of carbon dioxide from new power plants so low as to effectively prevent any coal power plant from running without carbon capture and sequestration technology (which has yet to be proven feasible).

The rules are all pain and no gain. The rules would be extremely costly to American families and businesses, particularly so for the poor, Midwestern states which rely more heavily on coal for electricity, and the manufacturing sector which is on the threshold of renewed growth brought on by the oil and gas revolution.

What’s the benefit of this self-inflicted harm to the economy and American people? Next to nothing. The entire purpose of reducing greenhouse gasses is allegedly to have an impact on global temperatures (reductions in greenhouse gasses are just a means to that alleged end, but it often gets confused as the end itself).

Using the “Model for the Assessment of Greenhouse Gas Induced Climate Change,” developed with support from the EPA, climatologists Paul Knappenberger and Patrick Michaels estimate that the Clean Power Plan will avert a meager 0.018 degree Celsius (C) of warming by the year 2100.

In fact, if the U.S. went far beyond this greenhouse gas regulation and implemented a plan that crippled the economy by reducing carbon dioxide emissions by 100 percent, the world would only be 0.137 degree Celsius cooler by 2100. Including 100 percent cuts from the entire industrialized world merely avert warming by 0.278 degree Celsius by the turn of the century.

Waters of the United States Rule

This rule seeks to regulate almost every type of water in this country. This could mean anything from certain man-made ditches to “streams” that are dry land almost all year – except after heavy rain. The list of problems with the rule is extensive. For example, the rule:

To its credit, Congress took action and passed disapproval resolutions under the Congressional Review Act.

While Obama has vetoed all three bills, Congress has made it clear where it stands on these important issues (overrides are unlikely). Regarding the Waters of the United States rule, for example, Obama is the one who is trampling on property rights, ignoring states, hurting the environment, and effectively ignoring alleged illegal actions by the EPA. He’s the one ignoring the attorneys general and state officials from at least 31 states challenging the rule in court, not to mention farmers, home builders, small businesses, and even environmental groups.

Moving forward, Congress should continue to take action to rein in the EPA. Ideally, they would start doing this through the appropriations process. As much as they should be commended for their actions using the Congressional Review Act, they failed to address these rules in the recent omnibus appropriations bill.

There’s no question that it can be frustrating when Congress, who delegated its lawmaking power to the EPA in the first place, finds it very difficult to rein in the agency. The Congressional Review Act is helpful, but this entire experience shows why agencies shouldn’t be able to push such extreme regulations that are not authorized by a reasonable interpretation of statute or inconsistent with the intent of Congress when it enacted the law.

Congress needs to reassert its lawmaking power. This will mean reforming the rulemaking process and making sure that regulations reflect the will of Congress, not the ideological desires of bureaucrats.