Oakland’s Minimum Wage Is Up, Wal-Mart Is Out 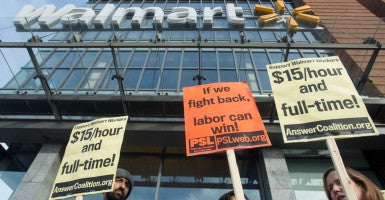 A minimum wage of $12.55 an hour in Oakland, Calif., may be the culprit for a Wal-Mart store’s closure.

Wal-Mart announced Jan. 15 it will close 269 stores globally, including 154 locations in the United States—affecting about 10,000 associates across the nation.

“The minimum wage in the city of Oakland played a factor, was one of the factors, they considered in closing the stores,” Oakland City Councilman Larry Reid told the San Francisco Chronicle.

“They wouldn’t go into any specific details in terms of their rationale for closing the store,” Reid told ABC 7 News. “But this store has been very successful for Wal-mart.”

The Oakland location, which ranked among the city’s top sales-tax producers, closed its doors Sunday evening following the corporate announcement. The store’s 400 employees will stay on moving inventory through mid-February, reported the San Francisco Chronicle.

Wal-Mart Stores Inc. “took into account a number of factors, including financial performance as well as strategic alignment with long-term plans.” The company said in a press release that it has plans to open 200 to 240 stores in the coming year internationally.

“Actively managing our portfolio of assets is essential to maintaining a healthy business,” Doug McMillon, president and chief executive of Wal-Mart, said in a statement. “Closing stores is never an easy decision, but it is necessary to keep the company strong and positioned for the future.”

Oakland Mayor Libby Schaaf, a Democrat, has been leading statewide efforts to raise the minimum wage to $15.

“This higher city minimum wage eliminated the jobs of the very workers advocates wanted to help,” said James Sherk, a research fellow in labor economics at The Heritage Foundation.

“The true minimum wage is $0.00 an hour,” Sherk said. “Companies do not have to hire workers, and they will not pay them more than the value they create.”

If the Oakland Wal-Mart workers don’t find employment by Feb. 10, they will get 60 days of additional pay and a severance package with a week of pay for every year employed by Wal-Mart, reports the San Francisco Chronicle.

Other Wal-Mart locations may hire some of the Oakland workers, ABC 7 News reports. More than 95 percent of the stores closing are within an average of 10 miles of another Wal-Mart in the United States.

The difference between these three locations is the Oakland Wal-Mart has over a 25 percent difference in labor costs for entry-level employees than the San Leandro locations, says Mark Perry, an American Enterprise Institute scholar and professor of economics and finance at the University of Michigan’s Flint campus.

“Given the reality that Wal-Mart operates on razor-thin profit margins (only 2.8 percent last quarter), a 25 percent difference in labor costs for entry-level workers can be the difference between a store that turns a profit and a store that barely breaks even, or loses money,” Perry wrote.

Of the U.S. stores closing, 102 are Wal-Mart Express locations, smaller convenience stores that have been piloted since 2011.

The Wall Street Journal reported on Wednesday that most Wal-Mart hourly store employees in the U.S. will see a pay increase in February.