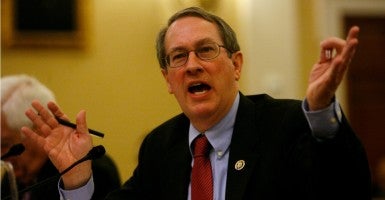 House Republicans have put together a team to address what they consider unauthorized expansion of presidential power. In coming months, the Task Force on Executive Overreach will explore how Congress can begin to reassert its legislative authority.

The effort is meant to address some of the habitual abuses against the constitutional separation of powers, he said.

“This is not just about Barack Obama,” Goodlatte told The Daily Signal. “There have been plenty of presidents, of both political parties, who have overreached and stepped on the Article I powers of Congress.”

During the present administration, Goodlatte points to Obama’s executive order that halted the deportation of nearly 5 million illegal aliens. And he argues that the president has flouted the law by circumventing Congress and acting unilaterally in other matters.

“This is a huge case,” Goodlatte told The Daily Signal. “I’m optimistic they will find, as the lower courts found, as Congress has maintained, as 26 state attorneys general contend, that the president doesn’t have the authority that he took.”

The Virginia Republican has filled out the task force’s roster of 11 to include high-profile Republican members such as Rep. Jim Jordan, R-Ohio, chairman of the House Freedom Caucus, and Rep. Trey Gowdy, R-S.C., chairman of the Select Committee on Benghazi.

Democrats have yet to finalize their nine members, he said.

Goodlatte maintains that Congress shares the blame for the growth of executive power. The Judiciary chairman faults the House and Senate for willingly surrendering their lawmaking authority to unelected administrators.

For a recent example, he points to the Obamacare legislation that was more than 2,700 pages long when Congress passed it in 2010. Now, Goodlatte says, the executive branch has written another 30,000 pages of regulations to implement that law.

“That’s a huge number of decisions and tremendous amount of power that has been transferred from the legislative to the executive branch,” he said. “It’s a mistake for Congress to designate that much power.”

But this play isn’t new. It’s been happening since the Nixon administration, Goodlatte argues. He contends that legislation like the Clean Air Act of 1970 had “very good objectives” but ceded too much authority to regulators:

There is no way that one can say that the Congress back in the 1970s—when they wrote that law—envisioned or intended that it would be rewritten to take into account things that bureaucrats would like to regulate almost 50 years later.

As a result, government agencies simply bypass Congress “when they think there’s a need for a change in policy,” he said. “They simply change the regulations.”

Goodlatte, who will serve as an ex officio member of the task force, said that “regardless of your party, this should be a concern.”

Jordan echoed that sentiment, arguing that “presidents of both parties have usurped Congress and legislated from the Oval Office.”

Goodlatte didn’t disclose specifics, opting instead to speak generally about the work of the task force until it presents findings in six months. He did say the group will reconsider the current state of traditional congressional powers such as oversight, authorization of spending, and confirmation of judicial nominations.

But Goodlatte didn’t shy away from addressing the current controversy surrounding the Senate’s use of the filibuster. He said he is sure the working group will wade into the discussion of the rule.

As long as the Senate obeys “rules that require a supermajority to move legislation,” Goodlatte said, the House can’t move a challenge to presidential overreach to the front burner.