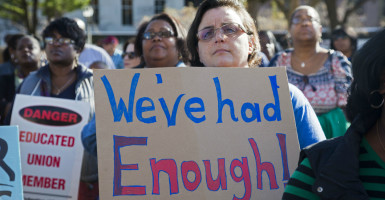 Nearly all schools in Detroit were closed Wednesday due to a massive teacher “sick out,” preventing students from attending class.

Teachers have complained about over-crowded classrooms, poor school conditions, and dissatisfaction with the idea of charter school growth in Michigan.

The teachers’ sick-out includes a planned march, which will conclude near a venue being visited by President Barack Obama Wednesday. Meanwhile, 46,000 kids are unable to attend school in Detroit.

According to the U.S. Department of Education, just 8 percent of Detroit eighth-graders can read proficiently. Eight percent.

And just seven in 10 students graduate.

But lack of progress is due not to a lack of resources in Detroit public schools, which spend roughly $16,000 per pupil per year. According to the Mackinac Center and a separate analysis by Randan Steinhauser:

– About 75 percent of the annual District budget goes toward paying employees covered by its current collective bargaining agreement for teachers.

– Out of a new $7,450-per-pupil grant the Detroit school district will receive this year, $4,400 will be spent on debt servicing and benefits for teachers who have retired.

– The superintendent can select up to two “professional associations” (unions) to be a member of each year, and the district (taxpayers) will reimburse his membership dues.

– DPS has a debt of over $3.5 billion, which includes unfunded pension liabilities.

Funneling money into a mismanaged school system has not created an environment conducive to improving academic achievement in Detroit.

Serious reforms to the district are necessary. Policymakers in Michigan would do well to enable every Detroit child—and every child in the state—to exercise school choice through the use of education savings accounts (ESAs), accounts that enable families to harness the funds that would have been spent on their children in their assigned pubic school to craft a customized education plan. They can begin by considering how to tackle the barriers to school choice that currently exist in the state.