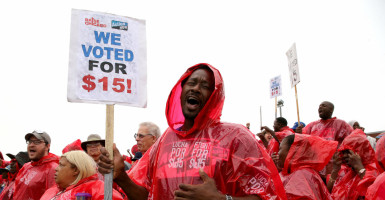 “It’s getting harder and harder to argue that high minimum wages don’t destroy many jobs, as advocates claim,” Salim Furth, a research fellow in macroeconomics at The Heritage Foundation, said. (Photo: Antonio Perez/TNS/Newscom)

Data shows a downhill economic trend for six big U.S. cities that hiked the minimum wage to $10 or more an hour in 2015.

An analysis by Investor’s Business Daily shows that these big cities are going through a period of adverse job effects in fields such as restaurant and hotel employment.

Graham highlights in his article that preliminary data possibly links the increased minimum wage to job decline but added, “The data aren’t, for the most part, stark and reliable enough to amount to smoking-gun proof.”

“It’s getting harder and harder to argue that high minimum wages don’t destroy many jobs, as advocates claim,” Salim Furth, a research fellow in macroeconomics at The Heritage Foundation, said.

“These are early data—we’ll get better numbers over the next year —but they show frighteningly consistent job loss across different cities from different parts of the U.S.”

Investor’s Business Daily reports that after a $15.37-an-hour mandate for hotels with 300 or more rooms in the Los Angeles area, hotel jobs declined, while the rest of California saw a growth in hotel and motel jobs.

“This early evidence is particularly bad because most researchers believe that minimum wages take effect slowly,” Furth said. “They destroy some jobs, but they prevent the creation of even more jobs later on. Prospects may get much worse for the unemployed in these progressive cities.”

The nation’s capital provides some of the most compelling data. Instead of adding about 2,000 leisure and hospitality jobs per year, as the city has in recent years, D.C. lost about 700 jobs in this sector, according to Investor’s Business Daily.

“The D.C. data are key because they reveal outright job losses confined to the city limits,” Graham wrote. “Researchers studying the latest round of citywide minimum wage hikes generally have had to rely on data for a big chunk of the broader metropolitan area, making the analysis more speculative.”

Investor’s Business Daily says leisure and hospitality sector employment decline in D.C. provides “plenty of reason to be wary of the big minimum wage hikes in the pipeline.”

Mark Perry, an American Enterprise Institute scholar and professor of economics and finance at the University of Michigan’s Flint campus, wrote a post on AEI’s blog Carpe Diem as a follow-up to Graham’s piece.

Since separate data for the city of D.C. and the D.C. metro area are available, this “provides a natural experiment to test for the employment effects of D.C.’s minimum wage law,” Perry wrote.

“While it might take more time to fully assess the impact, the preliminary evidence so far suggests that D.C.’s minimum wage law is having a negative effect on employment levels at the city’s restaurants,” Perry added.

“At the same time that suburban restaurants last year increased staffing levels by nearly 5,000 new positions, employment at the District’s restaurants contracted by more than 200 jobs.”

In October, Perry reported on Seattle’s shaky start for restaurants jobs after a $15-per-hour minimum wage hike was voted on and had started to to be phased in at $11 per hour in April 2015.

While Seattle’s data combines a metropolitan statistical area, not just the city limits of Seattle, Perry wrote that a “likely cause” of a drop of 700 restaurant jobs from January to September 2015 in the Seattle Metropolitan Statistical Area (while restaurant jobs increased by 5,800 positions for the rest of Washington) is the minimum wage increase.

“Cities like Portland, Maine, and Buffalo, N.Y., that are just beginning to implement similar minimum wage increases should slam on the brakes before too much damage is done,” Heritage’s Furth said. “Once you kill a downtown, it’s hard to bring it back.”