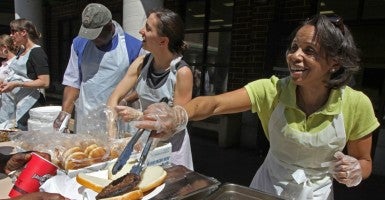 Wilhelmina Marie Wright, right, serves up hamburgers in May 2010 to hundreds of people at the Dorothy Day Center in St. Paul, Minn. (Photo by Bruce Bisping/Star Tribune/Newscom)

While a student at Harvard Law School in 1989, Wright wrote an article published in the prestigious UCLA Law Review that accused Reagan and his administration of “bigotry” and implied that property rights undergird American racism.

Testifying before the Senate Judiciary Committee in July, Wright, an associate justice on the Minnesota Supreme Court, renounced the style but not the substance of her remarks 26 years ago.

Stressing her inexperience at the time, the judge—known as “Mimi”—said her words were “inartful” but did not deny their underlying sentiment.

Wright’s confirmation by the full Senate comes amid other ongoing political battles. Some conservatives have pushed Republicans to block Obama’s judicial nominees to protest what they see as executive overreach. Liberals complain that Republicans already are delaying the nominations for political purposes.

>>> See How Your Senators Voted

Heritage Action for America, the lobbying arm of The Heritage Foundation, announced it would “key vote” the outcome of Tuesday’s vote and called on Republican senators to oppose confirmation of all “non-security nominees” in the future.

The vote was relatively narrow in comparison to the Senate’s confirmation of Obama’s last nominee, Judge Luis Felipe Restrepo, who was elevated to the U.S. 3rd Circuit by a vote of 82-6.

With the lifetime appointment, Wright, 52, makes history as the first black woman to sit on the U.S. District Court in her state. She has 25 years of experience and has served at each level of the Minnesota judicial system.