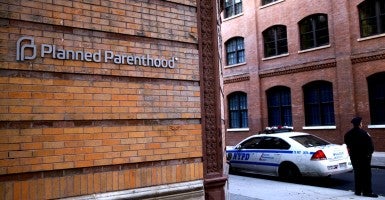 Last year, a number of academics penned a letter to the Obama administration demanding a criminal RICO (Racketeer Influenced and Corrupt Organizations Act) investigation into those who disagree with man-made global warming, following the lead of Sen. Sheldon Whitehouse, D-R.I.

As we wrote at the time, this would be an abuse of the Racketeer Influenced and Corrupt Organizations law—a law designed to go after organized crime, such as drug cartels and the Mafia.

This time, Planned Parenthood and its affiliates (the nation’s largest abortion provider, which is government-subsidized) are now trying to use RICO to sue various individuals and organizations who helped expose the attempted sale of fetal body parts for cash by various Planned Parenthood employees. Planned Parenthood has denied any wrongdoing.

In case you haven’t seen the video, take a look. What is on that video has spurred Congress to investigate Planned Parenthood and given rise to fresh calls to defund the abortion provider.

But rather than handle what’s actually on the video, Planned Parenthood is suing, claiming, among other things, that the undercover videographers violated RICO and federal wiretapping laws. This is an attempt to divert attention from the horrific and potentially illegal acts of Planned Parenthood.

As in the global warming case, this attempted use of RICO also raises serious First Amendment concerns—all the more so because this use of RICO is specifically targeting media activity.

This use of RICO could backfire, for multiple reasons.

First, this case brings to mind the RICO case of National Organization of Women v. Scheidler. There were multiple legal issues in that case, but it involved similar plaintiffs (a pro-abortion group, NOW) and defendants (anti-abortion protesters), and a similar set of facts (the use of RICO to intimidate pro-lifers engaged in fundamental First Amendment activity). After a 28-year legal saga and three trips to the Supreme Court, the pro-life group won over $60,000 from the pro-abortion group, NOW.

Planned Parenthood’s tactic and misuse of the RICO law could also backfire because its legal theory of RICO is incredibly broad and could harm all sorts of advocacy groups in the future.

The theory is that the videographers who caught Planned Parenthood red-handed violated RICO because they intended to harm Planned Parenthood’s business and because their video caused Planned Parenthood to have to spend money on security and other things. But if this legal theory were correct, RICO could apply to routine corporate intelligence and marketing decisions, or the undercover work done by reporters all over the country. CBS’ “60 Minutes” made its reputation with such work.

Often, private businesses choose where to locate a new store based on a desire to harm competitors. One restaurant chain might choose to park next door to a competitor not only to capture the consumers, but also to force the competitor to spend time and money responding to the new business threat. This is not to say that such harm to a business can’t count under RICO if there is other evidence of “racketeering activity,” and certainly, there is a point at which such behavior could might raise questions under the antitrust laws.

But simply causing economic harm to a business by doing something otherwise legal, such as exposing illegal action, cannot qualify under RICO. If it did, everyone from Fox News to MSNBC and other news outlets would be on the hook. PETA would be on the hook. So would a host of other advocacy groups.

It cannot possibly be that Planned Parenthood hopes to actually win the lawsuit. More likely, they hope to harass the whistleblowers, making this a perfect case for California’s anti-SLAPP law, at least with respect to the California state law claims.

Anti-SLAPP laws are intended to stop vexatious lawsuits of this type whose only intent is to shut up the other side. Another reason for Planned Parenthood’s lawsuit strategy may to be give friendly media outlets an ability to stop having to justify the unjustifiable conduct exposed in the videos and go on the offensive—”let’s not talk about the videos; let’s talk about how they obtained the footage!”

Hopefully the lawsuit will be quickly dismissed, and not drag on for 28 years!