Why a Global Approach Is Needed to Defeat ISIS 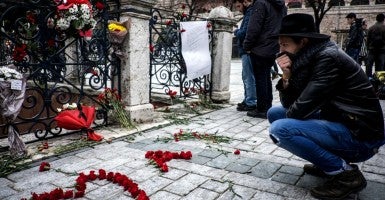 A memorial at the site where 10 tourists were killed by an ISIS suicide bomber on Jan. 12th in Istanbul, Turkey. (Photo: Jodi Hilton/ZUMA Press/Newscom)

During his final State of the Union address to Congress on Tuesday, U.S. President Barack Obama attempted to downplay the threat to U.S. national security posed by the rise of the so-called Islamic State (ISIS or ISIL).

But a special report recently published by the Heritage Foundation on combatting the ISIS foreign fighter problem explains why Obama’s policy is failing and how the U.S. can (and should) pursue a more robust, multi-pronged, and global approach to defeating the deadly terrorist group.

Shrugging off the threat from ISIS seemed little more than an attempt to deflect attention away from Obama’s administration’s failure to stanch the threat and to avoid stepping up action against the group in his final year in office. The American people (and rest of the world) are unlikely to be mollified by Obama’s words.

This week’s suicide attack on German tourists in Istanbul that Turkish officials blame on ISIS has highlighted the incongruity between Obama’s State of the Union address and the very real dangers posed by the group’s growth over the last eighteen months.

According to the Heritage Foundation report, ISIS has established a presence in at least 19 countries and has attracted more than 25,000 foreign fighters to join its ranks in Syria and Iraq. Alarmingly, these foreign fighters include over 4,500 citizens from Western nations.

The most effective way to halt the surge of foreign fighters flocking to the region is to demonstrate that ISIS is not invincible and that the U.S. and its partners will fight to push the group back from its strongholds in Iraq and Syria.

While the U.S. and Iraqi forces recently made headway against ISIS by re-capturing the city of Ramadi in Iraq’s Anbar province, which ISIS took over last May, ISIS-inspired or planned global terrorist incidents seem set to rise.

Continued military success against ISIS in Iraq and Syria is necessary, but not sufficient, to defeat the overall threat. To reduce the threat of ISIS-inspired attacks across the globe, the U.S. and its partners must develop more effective ways to counter ISIS ideology, which is being spread in increasingly sophisticated ways through social media, the internet, and carefully devised recruiting techniques.

ISIS claims that true Islam is being practiced in its caliphate, declared by ISIS leader Abu Bakr al-Baghdadi in June 2014 shortly after the group captured Mosul, Iraq’s second largest city. According to ISIS propaganda, Muslims can live out their faith in a committed Muslim community that offers camaraderie and identity.

While there is no one explanation for what drives young Muslims to be attracted to ISIS’ radical vision, one important motivation for Muslims in Europe appears to be a sense of marginalization within their societies. ISIS recruiters target these individuals, often through social media and the internet, and seek to increase their sense of isolation and convince them to believe in ISIS’ apocalyptic vision of the world.

In South Asia, where the Taliban, al-Qaeda, and affiliated groups are already well entrenched, ISIS has sought to gain recruits by emphasizing that Islamic religious texts refer to South Asia’s key role in establishing a global caliphate.

The Hadith (sayings of the Prophet Muhammed) apparently makes reference to a great battle in India, where a final showdown between Muslims and non-Muslims before the end times will supposedly take place.

While ISIS has so far been only marginally successful in establishing a foothold in South Asia, its growing presence, especially in eastern Afghanistan in Nangarhar province, is raising concern and complicating the militant landscape in the war-torn country. As the special report points out, the U.S. has many tools at its disposal to intercept ISIS terrorist plots before they are carried out and to halt the flow of foreign fighters. Heritage Foundation policy analyst for homeland and cyber security David Inserra recently noted the following in an article on the U.S. refugee screening process:

The administration should remain selective in the refugees it accepts, focusing on those applicants about whom the U.S. has an acceptable amount of intelligence[.] … [A]fter the attack in San Bernardino, the American people deserve and Congress should request details about how all forms of vetting can be and should be constantly improved. The government owes it to its citizens to use all lawful tools at its disposal to prevent terrorist travel.

The report notes that the U.S. government must do more to share information on terrorist travel with international partners; bolster law enforcement in dealing with the domestic threat; and raise community awareness about the problem of youth radicalization.

Unless the U.S. leads a global campaign to simultaneously deny ISIS territory, disrupt its recruitment efforts, and uproot its ideology, ISIS will continue to increase its presence throughout the Middle East, Africa, and South Asia—raising the specter of terrorist attacks across the globe.

Unfortunately, Obama did a poor job of positioning and preparing America for the task at hand.