Parents Are Winning. That’s Why the Far Left Is Turning Us Into Bogeymen. 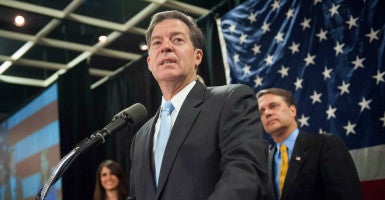 Kansas will be joining seven other states that have taken action to prevent the nation’s largest abortion provider from receiving taxpayer dollars.

“Ensuring the health and safety of Kansans means protecting all Kansans at every stage of life,” Brownback, a Republican, said Tuesday during his State of the State address.

“Planned Parenthood’s trafficking of baby body parts is antithetical to our belief in human dignity,” he added.

Planned Parenthood has been subject to increased national attention after a series of videos released last summer by the Center for Medical Progress that raise questions about how the organization disposes of the tissue of aborted babies.

Though the ensuing controversy inspired a number of state and federal congressional investigations, the abortion giant has dismissed the accusations as a “smear campaign” and has denied illegal activity.

Reminding viewers he signed legislation in 2011 that stopped “most taxpayer funding from going to Planned Parenthood,” Brownback stated, “The time has come to finish the job.”

Brownback directed Kansas Department of Health and Environment (KDHE) Secretary Susan Mosier to prevent state funding of the abortion giant and said he would “welcome legislation that would enshrine this directive into state law.”

In a statement released after the address, Mosier detailed the initial process the department is taking to end its relationship with Planned Parenthood of Kansas and Mid-Missouri.

“KDHE will issue an intent to terminate letter. This letter will initiate the process to formally terminate Planned Parenthood as a KanCare provider,” Mosier said in the statement.

Responding to the governor’s speech, Planned Parenthood of Kansas and Mid-Missouri released a statement saying the action limits health care options for low-income Kansans and will lead to a costly legal battle.

“Kansans and their health care providers are not Mr. Brownback’s punching bag and we will fight back,” Laura McQuade, president and CEO of Planned Parenthood of Kansas and Mid-Missouri, said in the statement.

“The medical needs of Kansas women will continue to be met by providers in the Medicaid and KanCare network,” Kansas Lt. Gov. Jeff Colyer, a Republican, said in a statement.

“Planned Parenthood is attempting to mislead and frighten women into believing their health care services will suffer. This is not true.”

“Not one more penny should go to Planned Parenthood, a scandal-plagued abortion business that does not provide comprehensive health care services for women,” Mattox added.

Sarah Torre, a policy analyst in the DeVos Center for Religion and Civil Society at The Heritage Foundation, argues that Congress should redirect federal funds away from Planned Parenthood and towards alternative health care options.

“Taxpayers should not be forced to fund the largest abortion provider in America, especially after videos suggesting it harvests and sells the body parts of children it aborts,” Torre said.

Planned Parenthood did not reply to The Daily Signal’s request for comment.