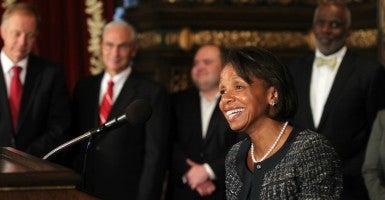 Wilhelmina Marie Wright, who in 1989 accused President Reagan of "bigotry," is President Obama's nominee to a federal judgeship. She is pictured here in August 2012 in Minneapolis. (Photo: Jerry Holt/ Star Tribune/Newscom)

President Obama’s nominee for a federal judgeship in Minnesota accused the Reagan administration of “bigotry” in her writing for the prestigious UCLA Law Review in 1989.

While a third-year law student, Wright wrote about the demographic shift of white families leaving cities for the suburbs:

Their mad scramble is aided by a Chief Justice who owned racially restrictive property and a Presidential administration that believes bigotry, poverty, and poor educational opportunities for most public school students are the unavoidable fruits of a ‘thriving’ free market economy.

Later in the same law review, but while addressing a different topic, Wright wrote that “the sanctity of property and the belief in the hierarchy of races” undergird racism in America.

Property rights, she continued, are “firmly protected by the words and action of the Constitution.”

When questioned by the Senate Judiciary Committee about these remarks on property rights, Wright said her words require additional context.

Stressing her inexperience at the time, Wright said the writing was “inartful” and made without “all of the training and experience that I have now.”

Wright said she was “owning that I did write those words” but explained that she was addressing racist housing customs in white neighborhoods known as “racially restrictive covenants.”

The justice adamantly insisted she supports property rights as espoused in the Constitution.

Wright’s nomination advanced out of the Judiciary Committee by a voice vote and awaits confirmation on the Senate floor.

Sens. Al Franken and Amy Klobuchar, both D-Minn., have shepherded Wright through the Senate process after recommending her nomination to President Obama last February.

“This is more than anything the pivotal moment,” Klobuchar told the Minneapolis Star Tribune in December. “All expectations are that she will pass.”

If confirmed, Wright will become the first black judge to sit on the District Court in Minnesota.

Relatively young at 52, Wright is seen as a possible addition to the Democratic short list for nominees to the U.S. Supreme Court. She has served as a judge at every level of the Minnesota state court system and has more than 25 years of experience.

Although ahead by one year, first lady Michelle Obama attended Harvard Law School at the same time as Wright.

“I am proud to nominate Justice Wilhelmina Marie Wright to serve on the United States District Court bench,” Obama said in nominating her last April. “She has a long and distinguished record of service, and I am confident she will serve on the federal bench with distinction.”