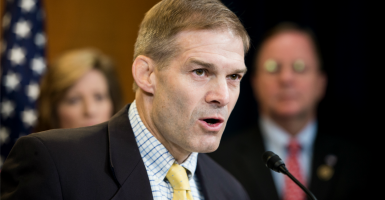 Conservatives are considering whether to redeploy a fast-track process known as reconciliation to advance welfare reform and other policy goals in 2016. They ran that legislative play late last year to send a bill repealing the Affordable Care Act to President Obama’s desk.

Republicans may use reconciliation to win more reforms of welfare, said Rep. Jim Jordan, R-Ohio, chairman of the House Freedom Caucus. But lawmakers in that conservative group are hesitant to employ the strategy unless they first receive guarantees from Republican leadership.

Asked at a breakfast with reporters Wednesday at The Heritage Foundation whether lawmakers are considering the reconciliation route for any policy initiatives, Jordan said “welfare reform is front and center.”

Using that tactic could help Republicans neutralize the filibuster threat from an entrenched Democrat minority in the Senate.

In reconciliation, a bill needs only a simple majority to come to a vote in the 100-member Senate, rather than the regular 60 votes. To qualify for this special status, a bill must square with the Byrd rule—that is, it must be budgetary in nature.

Though Obama vetoed the reconciliation package that gutted his signature health care reform and defunded Planned Parenthood for a year, Republicans may have better luck with a package that addresses welfare. They point to a precedent.

Today, Jordan envisions a similar scenario. The Ohio Republican said a welfare reform bill would present Obama with a tough choice: “Are you going to do what Bill Clinton did, or veto it?”

The 1996 reforms, emphasizing work or training requirements for those who receive welfare payments, eroded over the years—particularly under the Obama administration.

>>> Commentary: How the Expensive War on Poverty Failed

This time, House Republicans first must agree on a budget resolution to send over to the Senate.

For conservatives, there are two sticking points: In the budget resolution, they want to include lower spending levels and specific instructions for how to use reconciliation.

“Maybe we should think about writing that budget to a lower number,” Jordan said, “and do what the American people sent us here to do, which is reduce spending.”

There also is concern among members of the conservative Freedom Caucus that without specific instructions, Senate leadership may not follow through.

After agreeing to support a reconciliation package that increased government spending in 2015, House conservatives balked when leadership backtracked on a promise to fully repeal Obamacare and pursued partial repeal instead.

A beefed-up Senate version—the package that eventually made it to the president’s desk—gutted the regulatory heart of Obamacare and satisfied conservatives.

House Speaker Paul Ryan has made welfare reform a top legislative agenda item for the year, but lawmakers haven’t reached any agreements. GOP leadership isn’t likely to announce any plans until after the party’s annual congressional retreat in Baltimore this week.

And, Jordan admitted, “there’s a lot of debate still.”

His colleague, Sen. Mike Lee, R-Utah, said at the Heritage gathering that “welfare reform is a priority” but questioned whether “reconciliation is the right vehicle for that.”

He described it as “good tough love stuff” designed to “help families get to a better position in life and, frankly, treat taxpayers with respect.”