White House Sends Nominee to Export-Import Bank’s Board of Directors, But It’s Unlikely to Go Anywhere 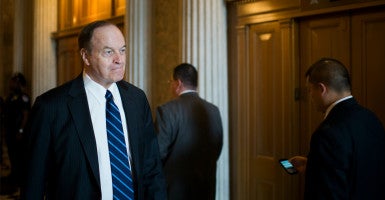 Sen. Richard Shelby, R-Ala., chairman of the Senate Banking Committee, said he is in no hurry to move on a nomination to the Export-Import Bank's Board of Directors. The board needs a quorum to approve financing of more than $10 million. (Photo: Bill Clark/CQ Roll Call/Newscom)

President Barack Obama named a new nominee to the Export-Import Bank’s Board of Directors Monday. But the nominee is likely to move slowly, if at all, through the Senate Banking Committee, which hinders the controversial agency’s ability to extend financing to some of its largest beneficiaries.

In a statement released Monday, the White House said Obama intends to nominate Republican J. Mark McWatters to the Export-Import Bank’s Board of Directors for a four-year term. The nomination will head to the Senate Banking Committee, which is unlikely to move McWatters’ nomination quickly.

McWatters served as a former aide to House Financial Services Chairman Jeb Hensarling, R-Texas, who is one of Ex-Im’s most vocal opponents. Hensarling led the charge against reauthorizing the bank, which provides taxpayer-backed loans and loan guarantees to foreign countries and companies for the purchase of U.S. products.

Ex-Im’s charter expired June 30, 2015, for the first time in its 81-year history. Congress reauthorized the bank through 2019 in December, but the agency is crippled in its ability to approve financing for some of its biggest beneficiaries, such as Boeing, Caterpillar, and General Electric, which primarily receive financing for transactions of more than $10 million.

The bank’s Board of Directors must approve all financing that exceeds $10 million and needs a quorum—three active members—to do so. Currently, only two of the seats on the five-member panel are filled, and the Senate Banking Committee had been sitting on Obama’s nomination of Democrat Patricia Loui-Schmicker to a second term on the board since March.

The president withdrew her nomination Monday.

According to The Mercatus Center’s Veronique de Rugy, the majority of transactions Ex-Im approved over the last eight years are for less than $10 million. However, they represent just 16 percent of the total dollar amount the bank approved.

Senate Banking Committee Chairman Richard Shelby, R-Ala., has said in the past he’s “in no hurry” to hold a vote on nominations to the bank’s board.

The Alabama Republican has said he’s waiting for the White House to send a nominee for vice chair for supervision of the Federal Reserve before moving on more than a dozen nominees, including Loui-Schmicker.

A spokeswoman for the Banking Committee told The Daily Signal the “committee will consider [McWatters] at an appropriate time.”

Shelby told Politico Monday he was in no rush to move on McWatters’ nomination.

Conservatives have cheered the Senate’s inaction on nominations to the board, as they view it as a way to stymie not only Ex-Im’s financing to large corporations, but also the president.

“Given the president’s complete and utter disregard for the Senate’s constitutional prerogatives, there is no reason for senators to confirm this nominee or any other non-security nominees,” Dan Holler, spokesman for Heritage Action for America, told The Daily Signal.

“Although the bank was reauthorized, Republicans should not give in to Obama’s desire to see the bank giving away hundreds of millions to massive international corporations,” he continued.