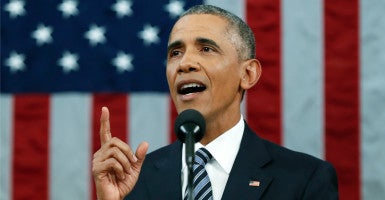 President Obama delivered his final State of the Union to a joint session of Congress. (Photo: Pool/Reuters/Newscom)

President Barack Obama looked to the future Tuesday night in his final State of the Union address, touching on issues ranging from health care and the economy to climate change, terrorism, and military strength.

Obama touted the achievements of his seven years in office and outlined how he thought his policies will help Americans for years to come.

The president delivered the nationally televised speech to a joint session of Congress as well as members of his Cabinet, U.S. Supreme Court justices, military officers, and dozens of special guests.

Here, The Daily Signal provides more context for some of Obama’s claims.

Obama: “Nearly 18 million have gained [health] coverage so far. Health care inflation has slowed. And our businesses have created jobs every single month since it became law.”

Despite the president’s claim that more than 18 million Americans now have health insurance—credited to Obamacare’s implementation—the majority of those who gained coverage qualified for Medicaid because of loosened eligibility.

Since the health care law went into effect in 2013, 31 states and the District of Columbia have opted to expand Medicaid, the federal health program for the poor.

From January 2014 to July 2014, more than 8 million Americans gained coverage under the president’s signature health care law. However, 71 percent of those signups were attributed to Medicaid expansion.

Obama: “More than 14 million new jobs; the strongest two years of job growth since the ’90s; an unemployment rate cut in half. Our auto industry just had its best year ever. Manufacturing has created nearly 900,000 new jobs in the past six years. And we’ve done all this while cutting our deficits by almost three-quarters.”

Though the deficit fell during Obama’s presidency, Romina Boccia, a senior budget analyst at The Heritage Foundation, said this can be attributed to the recovery following the 2008 recession and tax hikes on Americans.

Boccia also noted that Congress has cut spending, largely because of the caps put in place by the 2011 Budget Control Act. Still, in the years since they went into effect, Congress and the White House have weakened the caps.

Labor experts also argue that though the unemployment rate has fallen steadily, millions of Americans have left the workforce.

Obama: “We spend more on our military than the next eight nations combined. Our troops are the finest fighting force in the history of the world. No nation dares to attack us or our allies because they know that’s the path to ruin.”

In 2014, the U.S. accounted for more than one-third of military spending worldwide, according to the Stockholm International Peace Research Institute.

America spends several times more on its military than does second-place China.

In its 2016 Index of Military Strength, The Heritage Foundation reports that budget sequestration spending caps affected military readiness and capability. Though the U.S. military is able to engage in a single major regional conflict while tending to its normal presence in other countries, it would be “ill-equipped” to fight two significant wars at once, Heritage says.

Obama: “For more than a year, America has led a coalition of more than 60 countries to cut off ISIL’s financing, disrupt their plots, stop the flow of terrorist fighters, and stamp out their vicious ideology. With nearly 10,000 air strikes, we are taking out their leadership, their oil, their training camps, and their weapons. We are training, arming, and supporting forces who are steadily reclaiming territory in Iraq and Syria.”

Most of the airstrikes have occurred in Iraq, not in Syria, where the Islamic State, also known as ISIS or ISIL, has its home base. In Syria, the U.S. has to contend with an unfriendly dictatorship—which it wants neither to coordinate with nor to attack—and with Russian airstrikes, which began this fall.

Some critics have argued that the U.S. should send more ground troops to fight ISIS in Syria, but Obama has said Americans have no appetite for an enduring war, and that Sunni-Arab fighters must lead the effort to defeat the brutal Islamist terrorists.

Also in October, the Defense Department abandoned a $500 million program to train moderate Syrian rebels. It decided instead to use the money to provide ammunition and weapons for groups already succeeding in the fight against ISIS.

The decision to drop the training program came after the administration announced it graduated only a few recruits among the Syrian rebels.

Obama: “That’s why we built a global coalition, with sanctions and principled diplomacy, to prevent a nuclear-armed Iran. As we speak, Iran has rolled back its nuclear program, shipped out its uranium stockpile, and the world has avoided another war.”

The United States and five other world powers last summer reached a deal with Iran that limits the Islamic regime’s nuclear program in exchange for lifting international sanctions.

Iran agreed to reduce its stockpile of uranium by 98 percent. But the main provisions of the agreement expire in 10 to 15 years.

After that, Iran can produce uranium on an industrial scale.

When Iran meets its obligations—during what is known as “implementation day”—the international community will allow Tehran to access some $100 billion in frozen oil revenue. Iran has not yet reached implementation day, so technically its nuclear program has not been rolled back.

Iran completed an important step Monday when the regime reported it had removed the core of its plutonium-producing nuclear reactor, which limits the amount of plutonium to a level insufficient to make a bomb.

While the U.S. has said Iran is living up to its commitments under the nuclear deal so far, Tehran also has launched ballistic missile tests in violation of United Nations Security Council resolutions and continues to support unpopular proxies in the region.

The Obama administration argues that the nuclear deal with Iran is about only that issue, and that punishing Tehran for other actions could undermine the agreement.

Obama did not mention Tuesday’s news that Iran was holding 10 American sailors after two naval vessels traveled into Iranian waters in the Persian Gulf. U.S. officials said they expected the men to be released by Wednesday morning.

Obama: “But even if the planet wasn’t at stake; even if 2014 wasn’t the warmest year on record—until 2015 turned out even hotter…”

The president is right when he says last year was the warmest year on record, but that data point doesn’t necessarily translate into increased global warming.

In making this claim, Obama was referring to a 2015 study released by the National Oceanic and Atmospheric Agency (NOAA). But there are serious questions about the data driving that study and the conclusions drawn from it by politicians.

Some of the weather stations that collect those measures are located in industrial areas, surrounded by buildings, parking lots, and other structures that retain heat and skew the data.

For instance, the official weather station in Washington, D.C., is located at Reagan National Airport. As Patrick J. Michaels of the Cato Institute explains, that station produces an inaccurate weather report because it measures increased heat produced by “several hundred feet lower in elevation … the brick buildings [nearby], and the pavement of urban Washington.”

Geography could also play a significant role in some NOAA’s dramatic numbers. The weather stations that provide the data for the report are not spread out.

“These stations are not distributed in a regular, comprehensive geological pattern” notes David Kreutzer, a senior fellow in energy economics at The Heritage Foundation. As a result, he concludes that the data “doesn’t prove a climate crisis is evident.”

Obama: “In fields from Iowa to Texas, wind power is now cheaper than dirtier, conventional power.  On rooftops from Arizona to New York, solar is saving Americans tens of millions of dollars a year on their energy bills, and employs more Americans than coal—in jobs that pay better than average. “

Among many factors artificially driving the price down was a generous federal production tax credit that pays producers 2.3 cents per kilowatt-hour.

Nick Loris, an economist who is the Herbert and Joyce Morgan Fellow at The Heritage Foundation, explains that subsidies and regulation—like the Texas wind credit—govern and skew significant portions of the energy market.

And although, as the president says, the solar industry does employ more Americans than coal, Loris says, that’s because of an unfair playing field.

“Heavy-handed regulations,” he says, “are driving out coal as an important, reliable energy source and destroying jobs in the process.” Meanwhile, “solar benefits from generous taxpayer-funded subsidies.”

The Energy Information Administration reported that in 2015 that“wholesale electricity prices at major trading hubs … were down 27 percent [to]37 percent across the nation” and that the price drop was “driven largely by lower natural gas prices.”