Meet the California Teacher Taking On the Unions 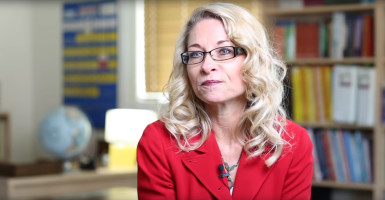 Rebecca Friedrichs is mounting a challenge to the "agency fees" nonunion members must pay to unions. (Photo: Mackinac Center)

For teachers standing in the cold outside the Supreme Court on Monday, as well as thousands of educators across the country, California teacher Rebecca Friedrichs is mounting a battle that could change the power of public-sector unions.

In the Supreme Court case Friedrichs v. California Teachers Association that went before the nine justices today, Friedrichs is taking on the “agency fees” nonunion public employees are required to pay to the labor organizations.

After 80 minutes of arguments before the justices, Friedrichs emerged from the court to chants of “stand with Rebecca” from the crowd who had gathered to stand in solidarity with the California teacher.

“I’m a public servant, and I’m hired to do what’s right for those kids, so I dream of improving their educational experience,” she told The Daily Signal. “How can I help them gain the most they can gain? That’s my motive.”

At the heart of the case is the question of whether the agency fees public employees pay to unions are a violation of their First Amendment rights. And a forthcoming decision from the Supreme Court has unions fearing they could be dealt a significant blow, as the case would effectively make union dues optional for public employees.

In nearly half of the states, public-sector workers can opt out of paying full union dues and instead must pay agency fees, which fund collective bargaining negotiations.

But Friedrichs and nine other teachers joining in her case against the California Teachers Association, an affiliate of the National Education Association, say that collective bargaining is inherently political, since many of the positions unions take during negotiations with school administrators reflect their political choices.

“Collective bargaining is just as political as anything else, because they’re negotiating with local officials over the best use of tax dollars. That’s political,” Friedrichs said in an interview with The Daily Signal. “When you consider the fact that unions use their political dollars to put the officials into their positions, it becomes a troubling situation, because the unions and the local officials are on the same side of the table. They’re counting on union money to keep them in their position.” Friedrichs, a public school teacher for 28 years, pointed to the “last in, first out” policy that her union advocated for as an example of collective bargaining’s political nature. Friedrichs does not back the policy, which centers on seniority-based layoffs, but her union does. By paying agency fees to the union for collective bargaining, she is, in effect, paying for the union to advocate for last in, first out during negotiations with school administrators despite her opposition.

“This hurts children,” she said of last in, first out, or LIFO. “Some agree with the union, but many are opposed to putting seniority rights ahead of merits. In California, we just had a teacher of the year who was laid off because of last in, first out. That is just totally wrong. LIFO is political.”

“I kind of feel hypocritical, because a lot of the political stances that they give to do not support education, so the money that is going toward political agendas is not making a difference in education,” said Sheri Joseph, a teacher in Buena Park, Calif., of union dues.

Sheri Joseph, who teaches in the classroom next to Friedrichs’ at Holder Elementary School in Buena Park, Calif., has been paying agency fees for the last three years. At first, Joseph told The Daily Signal, she wasn’t aware of what her union dues were going to. But she later learned that she—through the union—was funding political causes that violated her religious beliefs.

“I kind of feel hypocritical, because a lot of the political stances that they give to do not support education, so the money that is going toward political agendas is not making a difference in education,” she told The Daily Signal today.

The question of agency fees that went before the Supreme Court today had previously been decided by the high court in the 1977 case Abood v. Detroit Board of Education, which stated that public employees had to pay agency fees to fund a “fair share” of collective bargaining agreements.

Unions say that agency fees are necessary, since employees who decide to opt out of paying full union dues still benefit from collective bargaining and would continue to do so if the court rules with Friedrichs—what’s known as the “free rider argument.”

“A lot of my colleagues at work don’t realize that no one is compelled to join a union, and no one has to pay for political activity that a union does,” Pankaj Sharma, a teacher at Niles North High School in Skokie, Ill., and union member, told The Daily Signal. He continued:

But of course, if the union negotiates on behalf of all members and fights for all members to help create fair working conditions for all of them, it’s totally fair that everyone pays something into it, otherwise the union is greatly weakened and the protections in the workplace are weakened.

Joseph disagrees. She said that if the court rules in favor of Friedrichs, it will allow teachers who choose not to join a union to engage in their own negotiations with school administrators.

“I pay 100 percent of my collective bargaining dues, and if Rebecca does win, we would be free to do our own collective bargaining with our administrators individually, which I believe is how it should be done,” she said. “I don’t believe everyone should get a raise. I believe those that earned it should be getting a raise, and I would be happy and proud to do that on behalf of myself.”

“I hope the American people see what’s going on here. It’s time to put our country and kids above the rights of our unions,” said Rebecca Friedrichs, a California teacher challenging her union in the case Friedrichs v. CTA.

Friedrichs told The Daily Signal that as opposed to acting as a “free rider,” as the unions would argue, she instead serves as a “forced rider” during collective bargaining.

“Their supposed benefits aren’t worth the moral cost. I’m forced to fund those positions with which I disagree. I’m a forced rider, and they’ve been riding off me for decades,” she said. Friedrichs continued:

The Supreme Court is expected to announce its decision in late June, but legal experts say the conservatives justices and swing vote Justice Anthony Kennedy signaled they may be ready to overturn the nearly 40-year-old precedent set by Abood, which could be a setback for public unions.