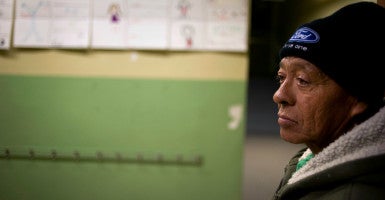 A study from the Pew Research Center found that Indiana’s population of illegal immigrants sharply dropped off in recent years, falling from 100,000 in 2009 to 85,000 in 2012. (Photo: David Maung/EPA/Newscom)

Indiana may crack down soon on employers who hire illegal immigrants, under a new bill that would prohibit those convicted of doing so from practicing business in the state.

The legislation, announced in the Indiana General Assembly last week, would enable judges to revoke business licenses from employers who repeatedly and “knowingly” hire illegal immigrants.

State Sen. Mike Delph, R-Carmel, told IndyStar that he introduced the bill to strip financial incentives from employers “who profit off of illegal immigration.”

Jon Feere, a legal policy analyst at the Center for Immigration Studies, said the legislation imposes “high stakes” on employers. He said it likely would spur more businesses to use E-Verify—the government database that matches an employee’s I-9 form to federal records for confirm legal eligibility to work.

To that end, Feere told The Daily Signal, the bill effectively would discourage illegal hiring practices because employers who use the federal registration system would be immune from prosecution. He said:

Ultimately, that’s a good thing for employers who are law-abiding since they will no longer have to compete with unscrupulous businesses that get work and sales by undercutting wages. It’s also a good thing for legal workers and taxpayers, who will likely see illegal immigration deterred from Indiana.

Indiana law currently requires that state agencies and public contractors use E-Verify. Private employers only need to enroll if they would like to qualify for specific tax credits on state income taxes.

Although the bill could be effective in encouraging businesses to use E-Verify, Feere said, it may be more effective for state legislators to simply mandate that all employers use the system.

A study from the Pew Research Center found that Indiana’s population of illegal immigrants sharply dropped off in recent years, falling from 100,000 in 2009 to 85,000 in 2012.

At least three states—Alabama, Arizona, and Missouri—already have laws in place that strip business licenses from employers who hire illegal immigrants.

“We absolutely do not condone employers knowingly hiring undocumented workers, but sometime it’s hard to distinguish what’s knowingly and what’s unknowingly,” he told The Daily Signal. “The punishment just doesn’t fit the crime.”

Brinegar said because immigration is a federal issue, it should be dealt with at the federal level, not at the state level.

“It could certainly be argued that Congress has done an abysmal job dealing with that issue, but that doesn’t mean that states should start taking things into their own hands,” he said.

Hans von Spakovsky, a senior legal fellow at The Heritage Foundation, said the constitutionality of revoking business licenses from employers who hire illegal immigrants was settled in 2011.

The Supreme Court ruled on an identical Arizona law when it took up Chamber of Commerce v. Whiting, von Spakovsky told The Daily Signal. Noting the high court decided that federal law didn’t prevent states from imposing penalties on businesses that hire illegal immigrants, he said of the Indiana measure:

This is a great piece of legislation that can be a very effective tool in preventing employers from hiring illegal aliens, particularly in the face of the unwillingness of the Obama administration to enforce federal prohibitions on such hiring.