How the Expensive War on Poverty Failed 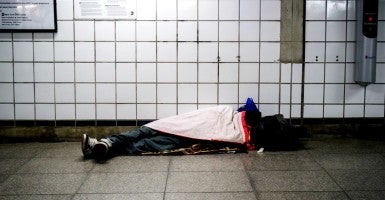 The official poverty rate has hovered between ten and fifteen percent for 50 years. (Photo: Richard B. Levine/Newscom)

Mark Erste is a graduate fellow for welfare studies in the DeVos Center for Religion & Civil Society at The Heritage Foundation.

“This administration today, here and now, declares unconditional war on poverty in America.” – President Lyndon B. Johnson, State of the Union address, January 8, 1964

This past Friday marked the 52nd anniversary of Johnson’s declaration and his pledge that “our aim is not only to relieve the symptom of poverty, but to cure it and, above all, to prevent it.” Yet after half a century and trillions of dollars, poverty has fought us to a standstill.

First, the War on Poverty has failed to achieve Johnson’s goal: to “strike[] at the causes, not just the consequences of poverty.” Since he declared “unconditional war,” poverty has thumbed its nose at its would-be conquerors.

The official poverty rate has hovered between ten and fifteen percent for 50 years. But that is only a part of the story. Since the 1960s, the institutions that contribute to self-sufficiency—namely, marriage and work—have declined. Today, more than 40 percent of children are born outside marriage; in 1964, only 7 percent were.

A lack of parental work also contributes to the problem. Even in good economic times, work rates among poor households are low, with an average of just 800 hours of work a year, or approximately 16 hours a week.

Meanwhile, the War on Poverty has been incredibly expensive.

Robert Rector, senior research fellow in domestic policy studies at the Heritage Foundation, writes that “taxpayers have spent $22 trillion on Johnson’s war. Adjusted for inflation, that’s three times the cost of all military wars since the American Revolution.” It’s time to change course. We need a new strategy against poverty.

Fortunately, there are good strategies waiting to be employed. The 1996 welfare reform was effective at moving welfare recipients off the rolls and into work, but it was incomplete. The reform affected only one program among what are today approximately 80 means-tested welfare programs that provide cash, food, housing, medical care, and social services.

The cornerstone of the 1996 reform’s success was work requirements. Requiring able-bodied welfare recipients to work promotes self-reliance, encouraging recipients to support themselves and move off the welfare rolls. It also helps ensure that assistance goes to those who most need it.

Ever increasing spending is not sustainable.

Promoting self-sufficiency for those who can work should be the goal. In Nov. 2015, the American Perceptions Initiative (a project of The Heritage Foundation) found that, consistent with earlier surveys, the vast majority of Americans support this principle of work. Reforming food stamps to include a work requirement for able-bodied adults would be a good place to start. Food stamp rolls grew immensely during the recession, but they were on an upward climb even prior to that.

Further, marriage penalties throughout welfare programs send the wrong signals about the significance of marriage for children’s well-being. Congress would do well to reform such negative incentives so that America’s poor, especially children, can more easily reap the numerous benefits of marriage.

The War on Poverty has failed the poor. After 52 years, it is high time for a new and effective way forward.