From Inside the Supreme Court, the Key Exchanges on a Case Pitting Unions vs. First Amendment 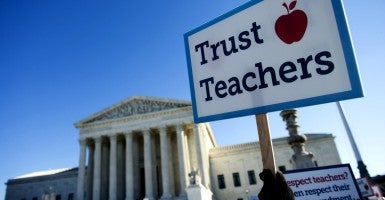 Activist rally outside of the Supreme Court during arguments for Friedrichs v. California Teachers Association on Jan. 11. (Photo: KEVIN DIETSCH/UPI/Newscom)

This morning, the Supreme Court heard a challenge to the requirement in California that government employees, such as public school teachers, pay fees to the local union even if they choose not to join the union.

In Friedrichs v. California Teachers Association, Rebecca Friedrichs and other teachers argue that forcing them to pay fees for the union’s collective bargaining costs amounts to compelled speech in violation of their First Amendment rights.

As the public interest law firm representing Rebecca Friedrichs explains, however, “[w]hether the union is negotiating for specific class sizes or pressing a local government to spend tax dollars on teacher pensions rather than on building parks, the union’s negotiating positions embody political choices that are often controversial.”

As Justice Antonin Scalia pointed out in a question at the oral argument, everything that is collectively bargained for when it comes to government employees is necessarily within the political sphere. In fact, attorneys for the defendants admitted that agency fees in California include political costs such as lobbying state legislators to support union demands.

In recent years in two other cases, Knox v. Serv. Emps. Int’l Union (2012) and Harris v. Quinn (2014), the Supreme Court has questioned the validity of the Abood case for imposing a “significant impingement” on an employee’s First Amendment free speech and associational rights.

Rebecca Friedrichs and other teachers from California are asking the Court to overrule Abood because public-sector collective bargaining is political speech. They also point out that the Abood decision cannot be reconciled with the rest of the Supreme Court’s First Amendment jurisprudence.

At today’s argument, Mike Carvin, who represents the dissenting teachers and is one of the country’s leading Supreme Court litigators, made a strong argument that the Abood decision should be overturned because the right of an individual—like Rebecca Friedrichs—to have her constitutional rights enforced outweighs stare decisis. Stare decisis is the policy followed by our judicial system that the courts should abide by and adhere to principles established by decisions in earlier cases.

As an example, a private employer can fire an employee for not being a Republican or a Democrat—something government employers cannot do. Forcing teachers to pay an agency fee to a public union is forcing them to subsidize speech they disagree with.

Carvin raised a laugh in the courtroom answering a question from Justice Stephen Breyer, who wanted to know how this case is different from requiring lawyers to pay dues to state bar associations. Carvin noted that the Court has said that a mandatory bar association can require dues related only to the regulation of lawyers; it cannot require dues that pay for ideological and political activity.

Collective bargaining does not involve regulation. Thus, it would be a violation of the First Amendment to require Carvin to be a member of the American Bar Association, which does not regulate lawyers, since Carvin “disagrees with virtually every word they say.”

The time for argument by the other side was split among the California Teachers Association, the State of California, and the U.S. government. California’s Solicitor General Edward DuMont was up first.

In a case involving constitutional rights, the essence of his argument was efficiency—the state government can work more effectively if it has to deal with only one union, rather than dealing with several unions or individual employees.

This is a very weak justification for violating the First Amendment. He said he didn’t disagree with Justice Scalia’s assertion that everything involved in collective bargaining for public employees is necessarily in the political sphere and therefore involves protected speech. But California has to be able to “run the government.” He couldn’t really explain how the majority of states that don’t have such a requirement are still able to run their governments effectively.

David Frederick, representing the union, also argued that agency fees and exclusive union agreements represent a reasonable method of managing the government. He claimed that the vast majority of terms negotiated through collective bargaining are mundane matters, not matters of public interest or policy.

Chief Justice John Roberts seemed skeptical of Frederick’s arguments that this type of arrangement is needed to prevent chaos. Justice Anthony Kennedy remarked cynically that a state would always benefit from suppressing speech.

Arguing for the Unions

Finally, it should come as no surprise that U.S. Solicitor General Donald Verrilli also argued on the side of the union, given that unions are a critical political ally and supporter of President Barack Obama and his political party.

Verrilli further maintained that the Court should not violate stare decisis and overturn the Abood decision since 20 states have passed similar laws, and its principles have woven their way into the fabric of government/union relationships. Overturning Abood would disrupt that long-term relationship. Verrilli seemed more concerned with supporting unions than protecting the First Amendment rights of individual teachers.

Collective bargaining by government unions involves core political speech, and the Court should recognize this. It should rule in favor of free speech and association and protect these teachers’ ability to exercise their First Amendment rights and not be forced to subsidize union speech that they fundamentally disagree with.