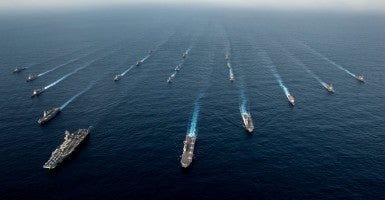 President Barack Obama’s last State of the Union address will address a range of topics, and almost certainly include foreign policy and national security in some fashion.

Unfortunately, the president seems set in his misguided ways on national defense. Here are five things that Obama should say in his State of the Union address, but almost certainly won’t:

North Korea is testing nuclear weapons, Iran is testing ballistic missiles, and Russia and China are increasingly assertive and dramatically increasing their military spending. However, under Obama, spending on national defense has dropped 25 percent from 2011 through 2015.

While there will be a slight increase in defense funding for fiscal year 2016, in fiscal year 2017, defense spending will be cut again in real terms. Given the threats that the United States faces around the world, and the fact that our military is currently in “marginal” condition, increasing defense spending must be a priority.

Because of the budget cuts, the U.S. Army is shrinking dramatically and this year will fall below the size it was on 9/11.

This smaller Army is being stretched thin exactly when additional Army units could be used to deter further Russian aggression, support efforts against terrorists, or provide assurance to our allies in the Middle East, Europe, or Asia.

Just like the Army, the Navy’s fleet is too small and stretched too thin. For the first time in years, the United States did not have an aircraft carrier in the Middle East this past fall. And now the Navy is facing another carrier gap this year.

The Navy isn’t just short of carriers; it’s short of almost every kind of ship, and is almost 25 percent smaller than many experts recommend. At its current size, the U.S. Navy simply won’t be able to do the things America expects it to do.

A health care system that increases service member and family access to private-sector medical care can be developed in a way that is also more affordable. The Military Compensation and Retirement Commission has recommended one way to do this, and others have made similar suggestions. Service members and their families deserve a better health care system.

Instead of focusing on closing the prison at Guantanamo Bay, potentially by executive action, Obama should instead create a legal framework for the long war against terrorism.

Rather than fighting Congress on closing Guantanamo, Obama should pay more attention to the fight against terrorism. Recent events have made clear that the terrorist threat is certainly real. More must be done by our president to keep America safe.