10 Steps Obama Should Take to Fix Our Foreign Policy 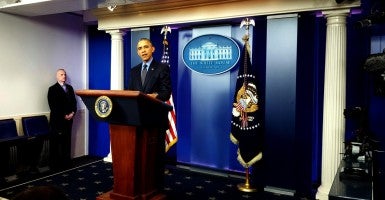 It’s a good thing President Barack Obama is “not interested in America winning,” because with our current strategy, we certainly aren’t.

As a result of Obama’s failed defense and foreign policy, we have experienced a sharp decline in U.S. power and influence both at home and overseas.

Although Obama is unlikely to change course any time soon, Congress should press the administration to take these 10 steps:

The U.S. needs to rethink its relationship with Russia. Russia poses a series of worldwide strategic and diplomatic challenges, including its buildup of its nuclear arsenal and military as well as its direct threats to U.S. allies and interests abroad.

The U.S. needs to abandon its wishful thinking and treat Russia as it actually is: “an autocracy that justifies and sustains its hold on political power by force, fraud, and a thorough and strongly ideological assault on the West.”

The U.S. must then make it clear that Russia’s acts of aggression will carry real and predictable costs.

The nuclear deal with Iran keeps its nuclear infrastructure intact while funneling roughly $100 billion in sanctions relief to the number-one state sponsor of terrorism.

The U.S. should halt the deal and adopt a tougher, more realistic approach to preventing Iranian nuclear breakout.

The U.S. should immediately reinstate all U.S. sanctions on Iran; strengthen U.S. military forces to provide greater deterrence; strengthen alliances in the Middle East, particularly with Israel; and then negotiate a better deal with Iran.

The Obama administration’s counterterrorism strategy is failing. It treats terrorism as a law enforcement problem and cedes away American initiative by relying on a “small footprint strategy.”

In order to successfully prevent the emergence of a global Islamist insurgency, the U.S. should rely on hard power and strong bilateral cooperation in order to “divide and defeat.”

The political landscape in the Middle East and northern Africa is rapidly changing. In order to grapple with the new developments, the U.S. should undertake certain guiding principles to encourage peace, stability, and democratic freedoms throughout the region.

These principles should include supporting civil society groups, encouraging constitutional development, prioritizing human rights and economic freedom, and collaborating with the local governments.

With this broad framework in mind, the U.S. should then tailor its various approaches to fit the needs of each individual country.

ISIS has been incredibly successful in recruiting foreign fighters. Forty-five hundred citizens from Western nations have traveled, or attempted to travel, to the Middle East to join the ranks.

In order to cut off the flow of foreign fighters, the U.S. should lead an international effort to deny ISIS territory by expanding military action and uproot the ideology by adopting region-specific strategies.

The U.S. economy directs benefits from increased economic freedom abroad. Therefore, to unshackle and revitalize the economy, the U.S. should encourage other nations to protect property rights, fight corruption, reduce barriers to trade and investment, and push back against state-owned enterprises.

The U.S. immigration and border security system is broken and failed. Immigration law has not been actively enforced, which has resulted in poor rule of law and increased illegal immigration.

To restore sanity to the mission of defending the border and enforcing rule of law, the U.S. should put forth a solution so that “Americans can enforce their laws, secure their borders, work with other countries to combat illegal immigration, and also create a legal immigration system that is easier to use, brings in more high-skilled immigrants, and creates well-functioning temporary-workers programs to support the U.S. economy.”

The U.S. military is only “marginally” prepared to defend America’s vital interests.

In order to improve performance and expand capabilities, the Department of Defense should (1) cut bureaucracy, (2) employ performance-based logistics, (3) establish the right global military footprint for America, and (4) craft a 21st-century acquisition strategy.

The U.S. needs to improve its global position through strengthened alliances in order to protect and guarantee vital American interests in Europe, the Middle East, and Asia.

Faced with increasing threats in Russia, Asia, and the Middle East, the U.S. should deploy ground forces to these areas in order to deter adversaries, strengthen allies, and protect U.S. interests. Ultimately, the U.S. must have adequate ground forces that can respond quickly in all three key strategic areas.

Although the Obama administration is unlikely to install any of these changes in the near future, Congress should nevertheless press the president to start taking the right steps now.

Hopefully the next president can reverse Obama’s course and follow through on delivering policies that will help keep America safe, free, and prosperous.