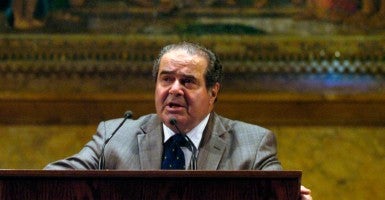 Perhaps only a sitting Supreme Court justice can get away with speaking before Dominicans and saying St. Thomas Aquinas got something wrong! (Photo: Phil McAuliffe/Polaris/Newscom)

Does a Catholic federal judge “participate” in abortion?

No, according to Justice Antonin Scalia, who recently gave a short lecture on “Saint Thomas Aquinas and Law” at the Dominican House of Studies on Jan.7th.

The occasion was the 800th Jubilee of the Order of Preachers (Dominican Order), a Roman Catholic religious order founded by St. Dominic in 1216. The audience included other federal judges (including Justice Samuel Alito and Judge William Pryor of the U.S. Court of Appeals for the Eleventh Circuit), academics, and a number of members of religious orders.

Scalia’s talk focused on a point of disagreement he has with the legal thought of St. Thomas Aquinas, the 13th century Dominican friar, philosopher, and theologian who has heavily influenced law in the West, including the United States. Aquinas looms large among those who study natural law – the way in which human nature imposes structure on human law.

One of Scalia’s signal accomplishments on the Supreme Court has been to refocus the attention of judges on the text of laws and of the Constitution. As he noted in his lecture, for some time American lawyers, following a case known as Church of the Holy Trinity v. United States, focused upon the “spirit” of the law – something Scalia considers contrary to the role of a judge, and an invitation to import one’s own prejudices rather than faithfully applying the law.

Upon reading Aquinas, Scalia was pleased to find that fidelity to the text of the law is something very important to the natural law, but then – “horrors!” – as the Justice exclaimed – Aquinas also states several times that when equity demands it, judges should depart from the text to vindicate the natural law.

To Aquinas, something that looks like a law, but is unjust, is defective – this is the familiar natural law trope that “an unjust law is no law.”

To Scalia, by contrast, all we have is the positive law. The Nuremburg Trials – where the Allies famously tried and publicly executed various Nazis according to notions of what Scalia decried as “supernatural” law – have been widely criticized as ex post facto justice, because there was no law on the books according to which the trial proceeded. We might agree with the result because victors in war are entitled to exact justice, Scalia noted, but those trials were in no sense “law.”

The task of the judge, Scalia has noted throughout his career, is to faithfully apply the text of a law – not to follow “Warren-esque” notions of natural law. In this respect, Scalia noted that he thought Aquinas “got it wrong.”

Yet at the time Aquinas was writing, Christendom was at its apogee: asking a judge to apply the natural law was reasonable because there was widespread agreement on what it required. Today, by contrast, widespread disagreement over morality makes appeals to the natural law very difficult, if not an “invitation” to import a judge’s idiosyncratic views—to which the Justice would object. In that sense perhaps Scalia’s positive vision, and Aquinas’s natural law vision, can be reconciled.

In addition to widespread disagreement, today we have laws on the books that many would consider manifestly contrary to the natural law—abortion is one example.

(Pryor also suggested an answer: that the entering of a judgment is different from upholding an appeal, to which the Justice joked: “So only Catholic trial judges are on the hook, and not appeals judges? That’s a relief.”)

Ultimately, Scalia has only one answer to what a judge should do when confronted with a law that he believes is contrary to right reason and morality: one might recuse; or if the entire legal system is thoroughly rotten, one might resign. In no circumstance is a judge to depart from the text in order to perfect the law, according to Justice Scalia.

In all the entire event was well-received: Perhaps only a sitting Supreme Court justice can get away with speaking before Dominicans and saying St. Thomas Aquinas got something wrong!