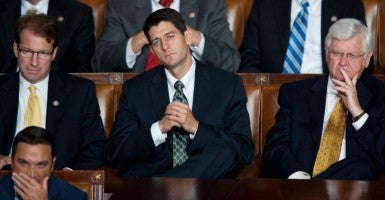 House Speaker Paul Ryan has given Congress a New Year’s resolution: Skip gigantic spending bills and return to the regular, piece-by-piece appropriations process. That will prove a tough exercise for lawmakers in 2016, however.

The calendar and political obstacles are daunting. Congress will have a shorter session this year, making it difficult for legislators to pass all 12 appropriations bills individually—a feat that hasn’t been accomplished in over two decades.

In recent years, Congress has made a habit of approving government spending with a single vote. Instead of voting to fund individual agencies and programs one at a time, legislators bundle smaller appropriations bills into a single lump package.

Inside Washington, that massive legislation is known as the omnibus. Ryan calls it a “crap sandwich.”

“We shouldn’t be putting appropriations bills together this way,” the Wisconsin Republican said late last year. “We shouldn’t have a handful of people in a room putting together a trillion-dollar spending bill.”

Still new on the top job in December and with a deadline looming, Ryan finished negotiations with Minority Leader Nancy Pelosi on a $1.8 trillion omnibus deal—legislation left over from his predecessor as speaker, John Boehner, R-Ohio.

Ryan promises things will be different. Starting in 2016, he says, the 12 government appropriations bills will be considered one at a time. And House conservatives say they’ll watch closely to make sure the speaker follows through.

“We have one job this year, and that’s to fund the government in a responsible, thoughtful, and constitutional manner,” Rep. Thomas Massie, R-Ky., said Wednesday. “If we are here next year having just passed an omnibus, that is an F-minus [for Ryan]. If we pass 12 appropriations bills and stand our ground and force the Senate to face these issues, that’s an A.”

Justin Bogie, a senior fiscal policy analyst at The Heritage Foundation, says passing the individual appropriations would be a “monumental step toward returning to regular order.”

By debating each appropriations bill individually, Bogie said, Congress would be able “to make tough policy decisions and eliminate wasteful spending and duplicative programs that fall outside of the scope of the federal government.”

The omnibus has been criticized as a favorite vehicle for pet projects and questionable spending. In recent years, Sen. Jeff Flake, R-Ariz., has followed previous lawmakers’ tradition by releasing an annual Wastebook detailing hundreds of expensive government programs of questionable merit.

Going through appropriations bills one at a time would give the House an opportunity to find and cut out the questionable spending that Flake targets–such as the millions of taxpayer dollars spent to study sheep in microgravity or monkeys on treadmills.

But picking out wasteful programs as the House evaluates 12 separate appropriations bills likely will be a lengthy process.

Congress must approve all government spending before a Sept. 16 deadline. Although lawmakers regularly miss deadlines, they haven’t successfully funded the government through the regular process in more than 20 years.

And lawmakers have only 110 days to try—three weeks less than they had last year.

An aide to Majority Leader Kevin McCarthy, R-Calif., told The Daily Signal it’s not unusual for congressional sessions to run short during election years. The majority leader crafted the calendar in consultation with Ryan’s office.

But even on a tighter schedule, the aide said, the House should have plenty of time to finish legislative business. What will happen in the Senate is another matter.

Senate Democrats regularly have filibustered House-passed appropriations bills in the past. And it’s not clear whether Reid will allow any of Ryan’s bills to make it to the Senate floor.

“Congress absolutely has to return to regular order on appropriations and start working in the daylight,” said Sen. James Lankford, R-Okla., who sits on the Appropriations Committee.

“There is no reason for the minority leader to block open debate and amendments on the Senate floor,“ Lankford told The Daily Signal in a prepared statement. “The broken appropriations process needs to be fixed this year to end [continuing resolutions] and mega-omnibus bills.”