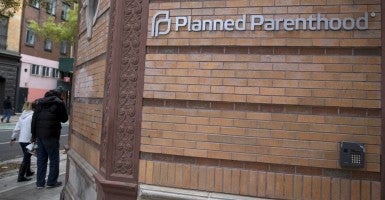 Planned Parenthood’s financial profits are on the decline, according to the group’s latest annual report, which showed the group is seeing fewer patients seeking fewer services. While profits and private contributions are waning, government assistance rose by $25.3 million in the past year.

“This was definitely a bad year for Planned Parenthood as a business,” Jamie Hall, a senior policy analyst in the Center for Data Analysis at The Heritage Foundation told The Daily Signal. “They lost a significant share of their patients, provided fewer actual medical services, spent far more money on other things, made less profit, and became even more dependent on government funding.”

Planned Parenthood released its 2014-15 annual report in late December. Upon its release, Hall compared its numbers to those of the previous year.

In the report, Planned Parenthood also addressed a series of attacks that were triggered by a string of undercover videos produced by the Center for Medical Progress and its founder, David Daleiden.

“We are at a critical moment in our history. Over the past several months, we have been tested in every way imaginable — and have emerged stronger than ever,” Planned Parenthood wrote, referring to allegations that the organization profits off donated tissue harvested from aborted babies.

No one would bother attacking Planned Parenthood if we didn’t matter. Planned Parenthood’s resilient staff and clinicians are making a huge difference in the field of reproductive and sexual health care and in the cultural landscape at large.

Planned Parenthood, which has not yet responded to The Daily Signal’s request for comment, has continually denied any illegal conduct.

The most recent annual report accounted for the organization’s finances through June 30, 2015, and medical figures through Sept. 30, 2015. Because the first video in the Center for Medical Progress’ series was released on July 14, 2015, Hall said the public would likely have to wait another year to measure their full impact.

“The Center for Medical Progress videos were released relatively late in the Planned Parenthood fiscal year, so we will have to wait another 12 months to better understand their full impact,” Hall said.

According to the report, Planned Parenthood operates 661 health centers across the United States.