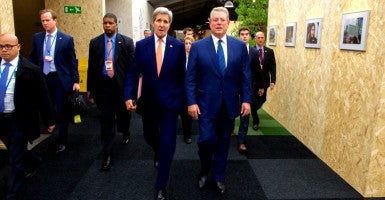 The National Oceanic and Atmospheric Administration (NOAA) recently released data showing that 2015 was the second hottest year on record (since 1895) for the U.S. On cue, the media and politicians used this data to hype impending climate catastrophe, pointing to extreme weather events that NOAA data show are not linked to warming trends.

At first glance, the headline for the NOAA data would seem to put to bed the claim that there has been no significant global warming for 15-20 years, but it doesn’t. First, there are serious questions about the quality of the weather stations and the adjustments made to the raw data.

There are serious questions about the quality of the weather stations and the adjustments made to the raw data.

Many of the weather stations are located in areas that have been increasingly compromised. For instance, stations that used to be in fields but are now surrounded by buildings and parking lots can have the temperature readings affected by the retained heat of asphalt and concrete and by heat given off by heating and cooling systems. In addition, the stations are not distributed in a regular, comprehensive geological pattern.

Though NOAA tries to adjust for the many thorny temperature data problems, the adjustment process seems to have inserted an upward bias to the temperature trend. Researchers have found that the U.S. warming trend with the adjusted data is 50 percent greater than for the raw data from the most reliable weather stations.

Second, this recent data report, only for the U.S. NASA’s satellite temperature record for the world, shows a definite leveling of temperatures for the past decade or two. It also clearly shows that the 2015 El Niño year was cooler than 1998, with its monster El Niño.

The predictions of global warming catastrophe depend on reality following model projections from the IPCC (the Intergovernmental Panel on Climate Change). These projections show accelerating warming. However, for recent decades, data (even the NOAA data) show that warming decelerated after a period of moderate warming.

He found that so far, the IPCC models have predicted more than twice as much warming as has actually occurred. Since these models cannot explain what has occurred for the past 30 years, there is little faith that they can accurately predict temperatures centuries into the future.

History is replete with record-breaking weather events. The future will have them as well, whether CO2 levels increase, decline, or stay the same.