The Facts Behind 4 of Obama’s Claims About Guns 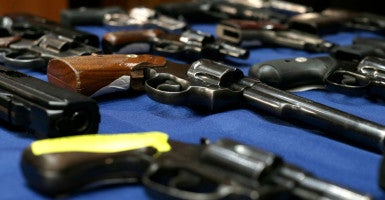 'The problem is, some gun sellers have been operating under a different set of rules,' President Obama said Tuesday in announcing executive actions to restrict ownership. (Photo: Andrew Gombert/EPA/Newscom)

Flanked by families who lost loved ones to mass shootings, President Barack Obama fought back tears as he announced a unilateral push to curb crimes committed with guns and called for a renewed national “sense of urgency” on the issue.

But at the same time, Obama admitted that more significant gun control “won’t happen in my presidency.” He underscored what he called the need for future congressional action and said Republican lawmakers are being “held hostage by the gun lobby.”

The Daily Signal reviewed four of the president’s key points against available data:

Obama adjusted an often made, often questioned argument that America is the only modern nation to suffer from epidemic gun violence. His current talking point is a combination of two discredited claims.

Speaking of the San Bernardino massacre, just weeks after the Nov. 13 terror attacks that left 130 dead in Paris, Obama still said “mass shootings just [don’t] happen in other countries.” That claim earned him four Pinocchios as a “whopper” of a falsehood from The Washington Post’s “Fact Checker” column.

Backpedaling, the White House later said the president meant to address the frequency of shootings in the U.S. compared to other nations. Again, “Fact Checker” columnist Glenn Kessler criticized this as a likely “apples-to-oranges comparison” and gave the president two Pinocchios for “significant omissions and/or exaggerations.”

That’s not exactly factual, according to an August 2013 report by The Washington Post. Purchasing a gun online from a federal firearms license holder or a vendor across state lines does require a background check.

To avoid a background check, a buyer would have to meet with the seller in person to purchase the firearm. As the Post notes, “that would be a private sale and federal law wouldn’t require a background check.”

Several states already require their own background checks for firearms sales—some for all guns, others only for handguns. Additionally, it’s a felony to sell guns knowingly to someone with a criminal record or history of mental health problems.

Most criminals do their illegal gun shopping on the streets, not online, research shows.

A study last year by the University of Chicago Crime Lab found that most criminals said they don’t get their weapons from gun shows or order them online, the Chicago Sun-Times reported. Instead, they buy the guns from those close to them or other criminals.

In a survey of about 100 prisoners, the lab found, 70 percent said they received guns from friends, family, and fellow gang members.

Technology to make firearms more like iPads and Tylenol bottles isn’t commercially available. None of the so-called smart guns—which require entry of a fingerprint or other biometric signal before firing—is on the market.

The earliest and leading version of the smart gun, the Armatix iP1, has been found wanting. In an exclusive performance review, a subsidiary of the National Rifle Association dismissed the weapon as “disappointing at best, and alarming at worst.”

Although the NRA’s assessment is biased, the economic component speaks for itself. The current price tag for the Armatix iP1: $1,798.

Smart gun technology would do little to affect civilian guns in circulation across the country. A 2012 Congressional Research Service report concluded that 310 million guns were in private hands in America in 2009.

During the Obama administration, however, demand for and manufacturing of firearms has only increased.

To make the case for stricter gun controls and increased background checks, the president enumerated every mass shooting from 2009 at Fort Hood, Texas, to last month in San Bernardino, Calif.

Through executive action, Obama said the FBI and Bureau of Alcohol. Tobacco, Firearms and Explosives would hire more than 200 employees to ensure “effective enforcement of gun safety laws that are already on the books.”

According to a Washington Times report, however, existing gun laws failed in most of the cases listed by Obama.

Background checks either were easily flouted or found entirely ineffective.

And none of the attackers, the Times reported, purchased his gun or guns through “the so-called gun-show loophole” that the president said he seeks to close.