Why Obamacare Is on the Road to Repeal 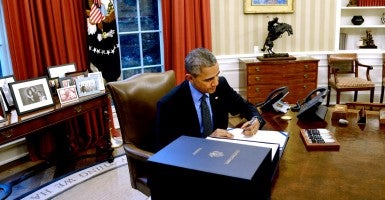 This week, the House of Representatives will clear a bill to repeal the Affordable Care Act (Obamacare) and send it to President Barack Obama’s desk.

Although it faces certain veto, it’s becoming increasingly clear that the president is only buying time for a dying law. Obamacare is in bad shape—both economically and ethically. If it were possible for a law to repeal itself, this one would be well on the way.

Simply put, three years into its implementation, the internal contradictions and weaknesses of Obamacare are multiplying.

First, more than half of the health insurance co-ops established under the bill went belly-up just as the open season began on the Obamacare insurance exchanges. Millions of dollars in federal loan guarantees went down the drain. In late October, the Kentucky Health Cooperative was, as its website decorously says, placed “into rehabilitation.” Several days later, the people of Kentucky elected a new governor who is opposed to Obamacare.

Soon after, United Health Care, the largest private insurer in the country, announced it was lowering its investment in marketing the Obamacare exchanges because of major financial losses.

United Health Care said it might even abandon the exchanges altogether in 2017. In remarks to shareholders, United Health Care’s CEO Stephen Hemsley apologized for the $450 million in losses and said:

We can’t really subsidize a marketplace that doesn’t appear at the moment to be sustaining itself … we saw no indication of anything actually improving.

These economic woes only compound the ethics problems that continue to plague Obamacare.

The Problem With Multi-State Plans

In order to ensure that Americans buying insurance on the exchanges would have at least one option that excludes coverage of elective abortion, Obamacare incentivized states to establish multi-state plans (MSPs) that could be offered to consumers everywhere.

These plans are administered by the federal Office of Personnel Management (OPM) and are designed to have access to millions of consumers eligible for premium subsidies in the exchange system.

In order to qualify as multi-state plans, however, the insurers were obliged to have their multi-state plan available in more states each year, beginning at 30 the first year and eventually reaching all 50 four years later.

This “glide path” to a 50-state multi-state plan system was less than ideal for pro-life advocates because it held the potential that some states would have no publicly subsidized plan with pro-life provisions for many years.

That concern was borne out, as the Charlotte Lozier Institute (CLI) has documented, as a number of states offered no pro-life alternative health plan as Obamacare began.

Now even some existing OPM-managed multi-state plans are faltering.

A Charlotte Lozier Institute review of the Obamacare exchanges as they opened this November shows that Massachusetts has dropped out of the multi-state program program, meaning the two multi-state plans from Blue Cross Blue Shield—that excluded elective abortion—are no longer available.

In Massachusetts, United Health Care is the only insurance company (out of 10) to offer an exchange plan without elective abortion coverage.

If and when United Health Care exits, Massachusetts citizens will have no pro-life option on the exchange.

The non-subsidized market will not offer an alternative, either, as the Massachusetts health reform law that predates Obamacare requires insurance plans in the state to pay for abortions with just a $50 co-pay.

In theory, there should have been 35 states offering a multi-state plan by 2015 and at least 43 by 2016. The target of 35 was reached in 2015, but for 2016 the number of states offering multi-state plans has actually decreased to 33 (including the District of Columbia). This is 10 short of this enrollment period’s target created by the law.

Aside from Massachusetts, three other states—New Mexico, Oregon, and Utah—also lost their multi-state plans for 2016, and only one state—Alabama—added a multi-state plan.

A storm is gathering. Nearly six years after enactment of Obamacare, millions of families have lost their choice of doctor, not seen $2,500 in annual premium savings, or had their conscience rights respected.

Obamacare has proven affordable neither for the insured nor for insurers. No matter who is elected in 2016, it is increasingly likely that a new course will be set. As that unfolds, Americans would be wise not to bank on more extravagant promises from Washington.