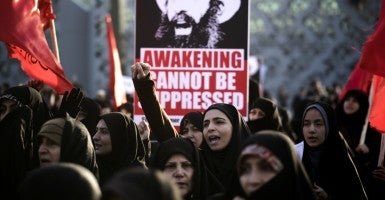 An Iranian veiled woman shouts anti-Saudi Arabia and anti-U.S. slogans as a placard with a portrait of the executed Shia cleric Sheikh Nimr al-Nimr is seen in background during a rally at a square in southern Tehran on Jan. 4, 2016. Tehran, Iran. (Photo: Morteza Nikoubazl/SIPA/Newscom)

Saudi-Iranian relations have fallen to a new low after Saudi Arabia executed a Shiite cleric on Jan. 2 and Iran’s theocratic dictatorship responded with ominous threats, the sacking of the Saudi Embassy in Tehran, and an attack on the Saudi consulate in Mashhad.

Escalating tensions between Iran and the Sunni Arab gulf states will further polarize the Middle East along sectarian lines, stoke the proxy wars waged by Tehran and Riyadh, and reduce the already low chances of forging diplomatic agreements to defuse civil wars in Syria and Yemen.

Most of the the 47 Saudi men executed on Jan. 2 were Sunni Islamist extremists linked to al-Qaeda. But four of them, including the firebrand cleric Sheikh Nimr al-Nimr, were Shiites, who constitute a minority sect in Saudi Arabia but a majority in Iran. Saudi officials maintain that although Sheikh al-Nimr did not commit violent terrorist acts, his calls for the overthrow of the Saudi royal family amounted to an incitement to violence and sedition.

Iran and Saudi Arabia have been bitter rivals competing for regional dominance since the 1979 Iranian revolution injected an ideological hostility into a relationship already strained by competing nationalisms (Arab vs. Persian) and sectarian differences (Sunni Saudi Arabia vs. Shiite Iran).

Iran’s supreme leader, Ayatollah Ali Khamenei, furiously threatened Saudi Arabia with divine retribution: “The blood of this oppressed martyr, which was spilled unjustly, will have a rapid impact, and the hand of divine retribution will seize the Saudi politicians by the throat.”

Iran clearly continues to act as a revolutionary state that claims the right to interfere in the internal affairs of other states to “protect” its Shiite co-religionists.

Moreover, Iran’s radical regime once again has violated its legal obligation to respect and protect foreign diplomats and embassies, as it did when it launched politically motivated attacks on the U.S. Embassy in 1979 and the British Embassy in 2011.

Iranian operatives also were caught red-handed in Oct. 2011 in a foiled plot to assassinate the Saudi ambassador (who now is the foreign minister) in a Washington, D.C., restaurant.

The latest Iranian provocation comes amid a series of recent challenges Tehran has mounted in flouting U.N. Security Council resolutions banning Iranian missile tests, conducting a live-fire naval missile test in close proximity to a U.S. aircraft carrier in the Persian Gulf, and seizing one more American hostage, in addition to the four Iran had already detained before the July 14 nuclear deal.

The Saudis, long frustrated by what they see as the Obama administration’s bungling in the Middle East, now are concerned about the lack of timely and effective American responses to Iranian provocations. The decision to execute al-Nimr and 46 other Saudis is another expression of Saudi Arabia’s increasingly hardline policies against Iran and its allies in Syria and Yemen under Saudi King Salman, who ascended to the throne less than a year ago.

One Saudi insider told Reuters, “Every time the Iranians do something, the U.S. backs off. In the meantime, Saudi (Arabia) is actually doing something about it in Syria, in Iran and in Yemen,” the source added. “The Saudis really don’t care if they anger the White House.”

Meanwhile, the Obama administration, which was quick to criticize Saudi Arabia for the executions, is determined to avoid angering Iran in a misguided effort to preserve what it regards as a foreign policy “legacy” achievement: the Iran nuclear agreement.