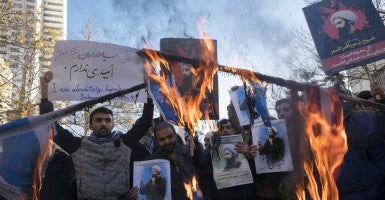 Iranian protesters burn U.S. and Israeli flags during a protest against the execution of the Shia cleric Sheikh Nimr al-Nimr. (Photo: Morteza Nikoubazl/SIPA/Newscom)

The breakdown in relations between Saudi Arabia and Iran complicates life for the United States, which has staked its hope for peace in the Middle East on these two rival powers playing nice.

While the U.S. tries to push both countries into helping end the war in Syria, the Obama administration is also banking on Iran fulfilling its obligations of a recently signed nuclear deal, and for Saudi Arabia to exercise restraint in the face of an agreement it sees as threatening.

According to foreign policy experts, the Obama administration’s response to the Saudi-Iran conflict, and how it approaches the related issues, will reveal a lot about how the U.S. views its role in the Middle East, and how it intends to engage with Shiite and Sunni Muslim powers in the future.

“I think this is an interesting moment of reflection because it gets at precisely the crux of the transformation the administration is trying to achieve,” said Ilan Berman, the vice president of the American Foreign Policy Council.

“The traditional role of the U.S. had been as an ally of the Gulf states, including Saudi Arabia. Under this administration, it has pivoted towards Iran and the Shiites in a substantial way. The way the U.S. responds to this dust-up speaks volumes to who this White House sees as a more reliable ally.”

The initial U.S. response to Saudi Arabia’s execution of a popular Shiite cleric, and the subsequent attack by Iranians of the Saudi Embassy in Tehran, has been to offer mild criticism of both sides.

Indeed, the State Department has emphasized it is not taking sides, announcing that Secretary of State John Kerry had talked with both Iran’s and Saudi Arabia’s foreign ministers to defuse tensions. Saudi Arabia on Sunday decided to cut diplomatic ties with Iran, and Sudan and Bahrain followed suit.

More telling will be how the U.S. manages its relationship with Shia-led Iran and Sunni-led Saudi Arabia in the coming months, and whether it can rely on either country to contribute to a safer Middle East.

In interviews with The Daily Signal, foreign policy experts revealed issues they will be watching.

The U.S. and other world powers are expected to begin rolling back sanctions on Iran as part of the nuclear agreement. In exchange for Iran scaling back its nuclear program, the U.S. and its negotiating powers will allow Tehran to access some $100 billion in frozen oil revenues.

While the U.S. has said Iran is living up to its commitments related to the nuclear deal so far, Tehran has also launched ballistic missile tests in violation of United Nations Security Council resolutions and continued to support its unpopular proxies in the region.

According to news reports, the Treasury Department told congressional lawmakers last week that it intended to sanction people and entities it considered responsible for the ballistic missile program, but the U.S. later decided to delay any action. Some fear that a lax U.S. response to Iran’s role in the conflict with Saudi Arabia will encourage Tehran to behave badly and undermine the nuclear deal.

“We are seeing a pattern of behavior on the part of the administration that is bound to embolden Iran,” Berman said. “It looks like the Iranians are doing things that violate the larger spirit of reconciliation the nuclear deal was built on, and as they do it, they are threatening to walk away from the deal. It seems Iran needs the deal more than we do, yet the U.S. is more invested in the deal than Iran is, and that has been uniformly constraining to the U.S.’s Middle East policy.”

Max Abrahms, a Northeastern University professor and terrorism analyst, argues that the enmity between Iran and Saudi Arabia would exist no matter how the U.S. interacted with those nations.

“Some people argue the U.S. is at least partly at fault because Washington has been courting Iran and leaving the Saudis out in the cold,” Abrahms said. “I am not that sympathetic to that position. The truth of the matter is, the Saudi-Iranian tension would exist without the U.S. and furthermore, the U.S. can do very little to reduce the antagonism there. The U.S. under Obama has tried to have good relations with both countries, but both countries have let the U.S. down.”

The U.S.’s long-standing alliance with Saudi Arabia has proven to be immune to disagreements, but some experts say the Sunni power has not been helpful enough in the fight against the Islamic State and that it has continued to commit human rights abuses.

“I think we are long past the point where the Saudis are useful allies,” said Toby C. Jones, a Middle East scholar at Rutgers University.

“They act in a way politically and [have an] ideology that is dangerous to the region, and it’s been that way for a while. My sense is, the U.S. should not be a status quo power in the Middle East and should not be committed any longer to the preservation of generations-old political order.” Despite the fact that it is less reliant on Saudi oil, the U.S. is unlikely to distance itself from an ally it sees as relatively stable and an important supplier of intelligence. The Saudis are also a major customer of American military equipment.

“The notion we would abandon Saudi Arabia because we don’t need their oil anymore is just stupid,” said Richard LeBaron, a non-resident senior fellow at the Atlantic Council and former State Department official. “I think this action by Saudi Arabia shows it to be flailing around as a Middle East power and not as a confident power, but at the very minimum, we have to stay engaged so we have some better idea of what motivated the action. In Saudi Arabia, there is probably a wave of change that will happen in that country, and there’s a possibility that change can be positive for our interests, and we need to promote that path.”

A U.N. Security Council effort to begin the peace process in Syria is heavily dependent on Saudi Arabia and Iran, who back opposing groups involved in the conflict.

The new dispute between the two countries could encourage them to enhance support for their proxy forces there, which would worsen the war and help the Islamic State, experts say.

The Islamic State, also known as ISIS or ISIL, has taken advantage of the Syrian chaos to carve a haven in the country.

“I would expect the Saudis to ramp up support for radical Sunni groups, and I would expect Iran to become even more committed to propping up the [Bashar al-] Assad regime,” Abrahms said.

Jim Phillips, a Middle East expert at The Heritage Foundation, also expects the war in Yemen to worsen, where Saudi Arabia is bombing Iranian-supported Houthi rebels and peace talks were scheduled for this month.

“Both sides now will have even greater incentives to pump up support for their allies in proxy wars in Syria, Yemen, Lebanon, and elsewhere in the Middle East,” Phillips said.

LeBaron has a more nuanced view on how the Iranian-Saudi feud will impact Syrian peace talks.

“It complicates it, but it was already very complicated; their ties to the talks were rather raggedy anyway,” LeBaron said.

The Saudi and Iranian foreign ministers both participated last month in Syrian peace talks in New York, and Saudi Arabia signaled Tuesday that the feud with Iran will not impact future discussions.

LeBaron believes that the U.S. needs to keep the pressure on both countries.

“I am a believer in the power of diplomacy, and we can’t give up because we think the Middle East is too complicated or unpredictable,” LeBaron said. “The U.S has to figure out—and it’s not easy—how we can be an agent of powerful change in the Middle East, and that’s a long-term, very difficult project. We can’t let blips like this deter us from pursuing that project.”