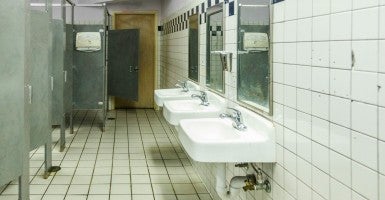 One day after Christmas, Washington state quietly adopted a set of new policies regarding transgender individuals using sex-specific facilities. The rules, adopted by the state Human Rights Commission, make it illegal for business owners to limit sex-specific facilities such as bathrooms, showers, and locker rooms to persons with the anatomical parts of one sex.

“To my knowledge, this is the first time in the country that there’s been a statewide effort to mandate all public accommodations cooperate with the gender identity concept that somebody declares,” Joseph Backholm, executive director of the Family Policy Institute of Washington, told The Daily Signal.

“This is the next step in this war on gender.”

The rules, which a state legislator told The Daily Signal took effect on Dec. 26, apply to businesses with eight or more employees. They also dictate that schools should “allow students to use the restroom that is consistent with their gender identity” and in most cases, give transgender students “access to the locker room that corresponds to their gender identity.”

If another student expresses concern about sharing a sex-specific facility with transgender individuals, the policy says the student “should be directed to a separate or gender neutral facility, if available.”

The Washington State Human Rights Commission has not yet posted the final rules online. The commission also could not be reached for comment.

“I hate to play into conspiracy stuff because that’s not what I’m trying to say … but it’s really been done quasi-private,” Rep. Graham Hunt, a Republican in Orting, Wash., told The Daily Signal.

“I had to have our attorneys and staff at the legislature actually get this information to confirm it so that we could read it and figure out exactly what has been going on.”

What’s been going on, Hunt said, is concerning to a range of individuals.

In addition to hearing complaints from elderly folks, people with special needs, concerned parents, and transgender people who disagree with the policy, Hunt said he’s heard from former victims of abuse.

“I’ve received emails from folks who have been abused and taken advantage of in intimate private settings because someone had access to a facility that they shouldn’t have,” Hunt said.

“I don’t believe that most people who are transgender are trying to gain access for the wrong reasons,” he added. “But what we have to be careful for and what we have to prepare for are those who are going to take advantage of these rules.”

>>> Related: Why These High School Girls Don’t Want a Transgender Student in Their Locker Room

The rules, originally proposed on May 20, 2015, were meant to protect transgender individuals from discrimination and clarify the state’s anti-discrimination law regarding sexual orientation and gender identity.

The mission of the Human Rights Commission is to “eliminate and prevent discrimination through the fair application of the law, the efficient use of resources, and the establishment of productive partnerships in the community.”

The issue percolated in 2015, when the YMCA quietly enacted its own policy of allowing transgender individuals to use the locker room consistent with their gender identity.

After members complained about the policy—some even canceling their memberships—the YMCA backtracked, mandating that in family facilities, “transgender members in transition” use private locker rooms for dressing and showering.

In mid-December, prior to the public becoming aware of the state’s new policies, the YMCA once again reversed its own rules to allow transgender individuals unlimited access to the facility of their gender identity.

Groups like the Gender Justice League quickly praised that decision.

“As community leaders, organizations that support the LGBT community, and faith leaders, we applaud the YMCA of Pierce and Kitsap Counties for their Dec. 15, 2015 decision to allow all its members, including transgender individuals, use of the restroom and locker room facilities that are consistent with their gender identities,” the group said in a press release. “By adopting inclusive policies, places of public accommodation can ensure that all people are welcomed, included, and supported.”

As they scramble to figure out the details of the Human Rights Commission’s new rules, state legislators are already planning a rebuttal.

Hunt, speaking to The Daily Signal, said he plans to introduce legislation next week to address the issue.

His bill specifically grants public and private entities the right to limit sex-specific facilities to “be segregated by gender if the person is preoperative, nonoperative, or otherwise has genitalia of a different gender from that for which the facility is segregated.”

“With this bill that I will be putting public, I’ve really tried to make this nonpartisan and as common sense as possible,” Hunt said. “There has been such an outcry from the public saying, ‘What are we doing … how is it that their rights trump my rights.’”