Cronyism on Display in Puerto Rico 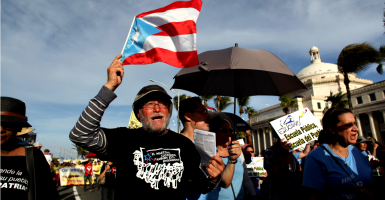 A member of a labor union shouts slogans while holding a Puerto Rico flag during a protest in San Juan. (Photo: Alvin Baez/Reuters/Newscom)

Employees in Puerto Rico take home a smaller share of income than anywhere else in the U.S.

But is this despite or because of the many regulations the Puerto Rican government uses to tilt the economic scale in favor of workers?

The island’s government leans to the left and has done all it can to interfere with the free market in Puerto Rico. For instance, in Puerto Rico, the minimum wage is extremely high—77 percent of the median wage. Unlike the mainland U.S., Puerto Rico has European-style labor laws that grant time-and-a-half pay to anyone who works over 8 hours a day and make it difficult to lay workers off.

In Puerto Rico, workers get a smaller slice of the pie than anywhere else in the U.S.

Proponents of these pro-labor policies have been willing to shrink the entire economic pie in order to get a bigger slice for a few.

The problem is that they haven’t achieved even that. In Puerto Rico, workers get a smaller slice of the pie than anywhere else in the U.S.

In the U.S. as a whole, employees in manufacturing earn 61 cents of every net dollar earned. But in Puerto Rico, they earn only 8 cents.

This is because of a policy trap set by Congress.

Congress created tax incentives in the 20th century in order to lure manufacturing to the island. But at the same time, Congress maintained the maritime Jones Act, which makes electricity and shipping prohibitively expensive, making Puerto Rico a bad place to do business.

So the principal industry that invested in Puerto Rico was pharmaceuticals, since stamping out pills uses little electricity and shipping and also requires vanishingly few workers. Pill factories took advantage of the tax credits (which are now defunct) without being badly gouged by the Jones Act.

In order for Puerto Rican manufacturing to diversify, the island needs relief from the Jones Act. The act requires that shipping between U.S. ports can be done only by American-built and American-crewed vessels. Since there are only a handful of ships that qualify, they can—and do—charge monopoly prices.

Even outside manufacturing, the strict Puerto Rican labor laws seem to have hurt workers. In 48 of the 50 states, employees earn a larger share of non-manufacturing income than they do in Puerto Rico (this calculation also excludes agriculture and mining).

The intentions of Puerto Rico’s progressive policymakers, stretching all the way back to the 1940s with Rexford Tugwell, were to elevate workers at the expense of investors. The unintended consequences of their policies have been to shrink Puerto Rico’s economic pie and shrink workers’ slice of that pie as well.