Israel Was Targeted by US Intelligence for Obama Political Purposes 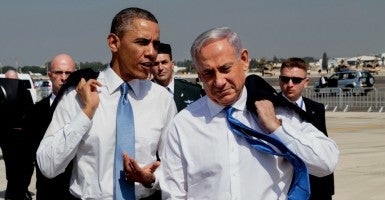 It’s been reported by the Wall Street Journal that the Obama administration has continued spying on several close American allies, and in particular on Israel. The news of American spying on Israeli Prime Minister Benjamin Netanyahu is significant because it gives the appearance of—if not demonstrates—use of U.S. intelligence by the Obama White House for political purposes (to pass the Iran nuclear deal). In addition, it that appears the NSA’s intelligence gathering in Israel included private conversations with U.S. lawmakers.

This comes after President Barack Obama had previously agreed in 2014 to curtail spying on close allies’ heads of state in response to news of U.S. intelligence gathering on German Chancellor Angela Merkel.

It seems, however, that there was White House willingness to reap the benefits of “incidental NSA collection” of congressional members’ conversations with Netanyahu around a political issue at the time of the Iran nuclear deal debate.

The administration put itself into a corner after Obama announced the Presidential Policy Directive 28 (PPD-28) in 2014, in response to the U.S. spying scandal in Europe.

This directive gives no explanation by the White House regarding the criteria for targeting some leaders and not others. We are left with patchy and troubling intelligence collection rules for foreign citizens. As I’ve argued before:

Among its many flaws, PPD-28 requires that, when collecting intelligence on foreign threats, U.S. operatives “must take into account (that) all persons should be treated with dignity and respect, regardless of their nationality or wherever they may reside and that all persons have legitimate privacy interests.” This feel-good provision puts a serious crimp in foreign signals-intelligence collection.

There is a profound lack of clarity for the intelligence collector. In the case of Israel, there is little doubt in my mind that the collection priorities focused on getting an Iran deal.

How does an NSA GS-12 officer know what the rules are? PPD-28 will ensure a risk-adverse collection posture, yet at the same time there is no doubt that Israel was targeted for political purposes.

So the Obama administration has attempted to bake and eat its own cake. Why apply rules outside PPD-28 that require policy direction on whom to collect information on in the high-profile cases and requiring a national security predicate? The answer is so that the White House will have a fall guy—so to speak—if the NSA’s collection should be publicly revealed.

This means the NSA is about to be thrown under the bus (again) by the administration because in the case of the alleged collection against Israeli Prime Minster Benjamin Netanyahu, it was up to the NSA to determine what to collect/share and what not to collect.

I would not go as far as to say the White House endorsed electronic surveillance of congressional members, but it was quite ready to pick up the “incidentally collected” intelligence when obtained from the coverage on the foreign party if it included (as it clearly did) reporting on U.S. persons, no less congressional members.

Somehow the risk to collecting information on Israel was further surpassed by the bonus of collection on Congress, given the high stakes on the Iran nuclear deal.

This is the problem with PPD-28: It is completely subjective in terms of the criteria for who and what represent a national security priority. Which countries constitute close allies? Germany, France, and Mexico, but not Israel?