How the Obama Administration Changed Our Missile Defense Strategy 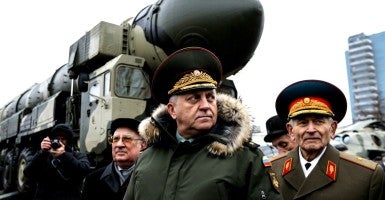 For now, Karakayev is right—not because the missiles are invincible, but because the Obama administration is deliberately limiting the United States’ ballistic missile defense program.

After the U.S. withdrew from the Anti-Ballistic Missile Defense Treaty in 2002, the United States focused on developing a layered ballistic missile defense system. The Bush administration concentrated on quick deployment of the ground-based midcourse defense (GMD) system for the protection of U.S. homeland. This system is made up of ground-based missiles and radars, which can intercept incoming missiles. To augment the protection within the United States, the Bush administration planned on deploying a radar to the Czech Republic with two-stage ground-based midcourse defense interceptors in Poland.

Change of Plans Under Obama

The United States therefore is deliberately pursuing a missile defense program to be able to intercept only a handful of incoming ballistic missiles of first, not as technologically advanced, generations.

Given the spread of ballistic missiles—their increasing sophistication, range, and lethality—it is time to put U.S. missile defense policy on a sound track.

To do so, the United States will have to pursue a space-based ballistic missile defense layer as well as continue to work on future technologies—for example, directed energy.