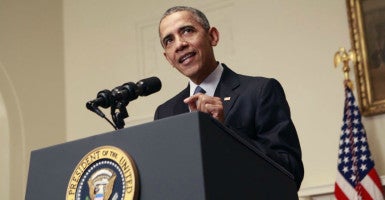 The question, they told The Daily Signal, is why taxpayers should pay for the work of radical academics and scientists who want Obama to launch a racketeering investigation of organizations that have an open mind on how much mankind contributes to global warming.

“I’m just not sure about where we are right now on the question of climate change,” said Angela Chellew, a legislative liaison in the Virginia House of Delegates.

“I’ve been reading about sea level rise near where I live off Norfolk,” Chellew said, “but then I read conflicting things about what it all means. I do think we need to be careful about how we spend our taxpayer dollars and how government regulations will impact average people.”

Chellew and other climate change skeptics spoke to The Daily Signal during the 2014 Republican Advance, a weekend retreat held at the Omni Homestead in Hot Springs.

About 500 Virginia legislators and party activists attended Dec. 12, even as hundreds of government officials and delegates from across the globe gathered in Paris to reach an international pact to counter climate change.

As the federal government continues to pump billions of dollars into activities related to climate change, Buchanan said, he is concerned that it subjects honest scientific inquiry to a highly politicized process.

Between 1993 and 2013, the U.S. government spent more than $165 billion on global warming or climate change issues, according to federal reports.

“I’m what you call a scientific skeptic,” Buchanan told The Daily Signal, adding:

I’ve studied the issue very carefully, and there’s plenty of science out there that refutes the theory of man-made global warming. But government officials are still racing ahead with very expensive regulations.

Government funding of climate change research is a big part of the problem because it tends to fuel global warming alarmism that isn’t rooted in sound science, Rep. Robert Wittman, R-Va., said in an interview with The Daily Signal.

“Scientists should be in a position where they can freely pursue research without any strings attached,” Wittman said. “But the government funding can have a chilling effect on the scientific method.”

Wittman, a candidate for Virginia governor who has a background as a biologist, said he would like to see more attention focused on ice cores and tree rings. Both, he said, point to significant periods of global warming in earth’s past, before the emergence of human industrial activity.

The recent United Nations Conference of Parties, also known as COP21, produced the Paris Agreement, a pact described as legally binding on nations in some respects but voluntary in others. The stated goal: limiting the rise in global temperatures to 2 degrees C (or 3.6 degrees F) by the end of the 21st century.

Obama’s representative was among more than 190 government ministers who adopted the pact by consensus. But the agreement’s restrictions on carbon dioxide would cost American consumers and businesses a pretty penny in higher energy bills, warned Nicolas Loris, a Heritage Foundation economist.

Contrary to what Obama and other government leaders have told the public, Loris argued, the most reliable scientific data show Earth is not heading toward a climate crisis and that natural forces, not human activity, are at work.

John Taylor, president of the Virginia Institute for Public Policy, told The Daily Signal that the Virginia General Assembly particularly ought to investigate the tens of  millions of taxpayer dollars, including state funds, that went to the work of a George Mason University professor specializing in atmospheric, oceanic, and earth studies.

“Unfortunately, double-dipping is nothing new in the state of Virginia,” Taylor said. “In fact, it is a state tradition. We have college professors and commonwealth attorneys in the General Assembly, and this has been going on for some time.”

Many Virginia residents and leaders don’t buy into what they consider alarmist claims about man-made global warming, interviews at the Republican retreat confirmed.

Even so, state taxpayers may not know they fund political activism that not only advances “alarmist” theories, but works to silence, marginalize, and even criminalize dissent.

That much became apparent earlier this year when 20 taxpayer-funded academics from Virginia’s George Mason University and other public universities from across the country signed a letter to Obama and Attorney General Loretta Lynch calling for criminal investigations of scientists and organizations that disagree with the administration’s position on global warming.

Shukla was the first of the 20 public employees to sign the letter to Obama calling for a probe of  “corporations and other organizations that have knowingly deceived the American people about the risks of climate change.”

They asked for the probes under the Racketeer Influenced and Corrupt Organizations Act, known as RICO. As previously reported by The Daily Signal, a  U.S. House committee wants to know more about Shukla’s work and the relationship between taxpayer money received by the academics and their urging of Obama to use racketeering law to go after businesses and other groups that oppose his climate change agenda.

The India-born Shukla, 71, is the founder of the Rockville, Md.-based Institute of Global Environment and Society, a nonprofit that received $63 million in taxpayer funds since 2001, according to financial data first compiled by the Washington Free Beacon. The $63 million accounts for over 98 percent of his environmental institute’s revenue in that time.

Critics say Shukla broke the law governing nonprofit groups by calling for the RICO investigation. They say the professor also appears to have violated George Mason University’s stipulations against conflict of interest as well as rules for federal grant recipients who work for universities.

One such critic is Ron Arnold, who has written about Shukla and his environmental institute at LeftExposed.Org, a project of the Heartland Institute.

Shukla receives a six-figure salary at George Mason University. He and most of the other George Mason academics who signed the RICO 20’s letter did not respond to The Daily Signal’s request earlier this year for examples of scientific skeptics who “knowingly deceived” the public about the risks of global warming.

A George Mason spokesman also did not respond to requests for comment on whether the university had concerns about Shukla’s environmental institute and whether it was confident he operated within school guidelines.

Rep. Lamar Smith, R-Texas, chairman of the House Committee on Science, Space and Technology, questioned Shukla in a letter and followed up with a separate letter to Shukla’s attorney asking for related financial documents.

Shukla’s environmental institute, Smith wrote to the professor, “appears to be almost fully funded by taxpayer money while simultaneously participating in partisan political activities by requesting a [federal] investigation of companies and organizations that disagree with the Obama administration on climate change.”

“Our staff has been in regular contact with GMU and Mr. Shukla’s attorney and are continuing to look into the matter,” a committee aide said in an email to The Daily Signal. “We don’t have anything to publicly report at this time.”

Paul Dirmeyer is another of the six George Mason University professors who signed the RICO 20 letter. Dirmeyer is a meteorologist who researches the role of the land surface in the climate system.

“Some press reports have distorted what the letter stated and its context,” Dirmeyer said in an email to The Daily Signal.  He said a blog post by Barry Klinger, another George Mason professor who signed the letter, “clarifies several points.”

“Further background that may answer your questions may be found in an article in Science or references therein,” Sirmeyer said in the email. “I will have no further response.”

The Virginia Institute for Public Policy describes its mission as promoting policies that uphold the rule of law and constitutional limited government.

Taylor, the organization’s president, said he faults the Republican Party for not doing more to dismantle incestuous relationships between academics and government agencies as well as similar arrangements that give rise to conflicts of interests, wasteful spending, and bloated bureaucracies that burden taxpayers.

“Every time the Republicans come to power they leave the infrastructure the Democrats put into place untouched,” Taylor said. “This way when the Democrats come back into power, they just pick up right where they left off.”

With the Virginia General Assembly set to convene its 2016 legislative session on Jan. 13, Marc Morano, editor of Climate Depot and producer of the new film “Climate Hustle,” said he sees an opportunity to push back against the infrastructure Taylor describes.

“Since George Mason is a state university, the relevant government oversight should be taken,” Morano said in an email to The Daily Signal. “What Shukla has done may be the tip of the iceberg.” “The funding of climate and climate-related studies by the U.S. government are now fueled by studying man’s influence on climate,” Morano told The Daily Signal. “And the researcher had better not have in mind any notion of challenging the politically imposed orthodoxy that mankind is driving dangerous climate change.”

“If a scientist publishes something ‘off message’ from the warmist narrative, they quickly find out that their results are not welcome,” he said. “Renowned scientists like hurricane expert Dr. Bill Gray found out that when you challenge skepticism, your federal funding dries up.”

Rep. Randy Forbes, R-Va., one of several Republican congressmen who addressed the Advance gathering, told The Daily Signal that the letter to Obama from Shukla and the other academics encourages action to thwart freedom of speech.

“I’m not real big on having investigations into what people think,” Forbes said. “We have the First Amendment. So let’s have a full, fair, open debate, and [let] the pieces fall where they may.”